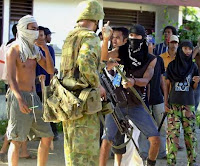 Brigadier Bill Sowry has taken command of the Australian-led International Stabilisation Force in East Timor during a ceremony in Dili on Friday 16 Jan. He replaces Brigadier Mark Holmes who commanded the operation during a period of sustained improvement in East Timor’s situation.

Based in Dili, Brigadier Sowry commands the Australian and New Zealand military personnel deployed in support of the East Timor Government and the United Nations. The role of the Australian and New Zealand troops – known as the International Stabilisation Force (ISF) is to assist local authorities and the United Nations to maintain a calm and secure environment.

Brigadier Sowry has more than 27 years service commanding Australian Army engineers. He has operational experience with the UN Mine Clearance Training Team in Peshawar, Pakistan and Operation Anode in the Solomon Islands. He also planned engineer contributions to Australian deployments around the world. Brigadier Sowry commands the ISF after a position with the Canberra-based Defence White Paper development team.

The Chief of the Australian Defence Force, Air Chief Marshal Angus Houston, said he was encouraged by the improvements in the security situation in East Timor. “The progress being made in East Timor is impressive. I am confident that under Brigadier Sowry’s leadership, the cooperative effort between the local security forces and the Australian and New Zealand troops will continue to bring stability to the people of that young nation,” Air Chief Marshal Houston said.

The Australian contribution to the ISF consists of approximately 750 troops, of which the majority comprise the East Timor Battle Group from Darwin-based 5th Battalion, Royal Australian Regiment and Adelaide-based 16 Air Defence Regiment. Supporting elements include an Army aviation group from 5 Aviation Regiment in Townsville as well as logistics personnel, military police and engineers. Approximately 150 New Zealand Defence Force personnel complete the force, including an infantry rifle company – re-roled from the Linton-based 16 Field Regiment.