The recent bloody history of the East Timor police and military 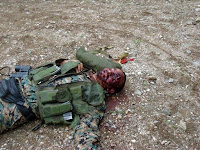 The major case which the Human Rights Division of the PDHJ is working on at present remains the case of petitioners (April 28, 2006) which focuses on human rights violations committed during April 2006. The events following the demonstration ending in violence on the 28 April 2006, when both the police (PNTL) and the military (F-FDTL) used lethal force against civilians, were of such seriousness that the Provedor resolved to employ his powers and open an investigation into the events in accordance with Article 35 of the Provedor’s Law. This investigation was later expanded to include the later incidents of May 2006.

This investigation was opened within 24 hours following the violent events of April 28 and 29. The Provedor immediately began an investigation into the allegations of human rights violations by both the police and the military, and began monitoring the detention of over one hundred individuals taken into custody by both the F-FDTL and the PNTL. In investigating the use of lethal force by PNTL and F-FDTL, which resulted in deaths and injuries, the PDHJ interviewed nearly seventy victims and witnesses up to the time of the submission of this report. As part of the investigation work, the Deputy Provedors and staff of the PDHJ made a total of 25 visits to 10 different districts during the first weeks of May and the month of June.

The investigation was still underway when the serious events between May 22 and 26 took place. During this period, armed conflicts occurred between the police and the military, who were split into regional divisions. A large number of people were shot dead by the F-FDTL on 28 and 29 April. The violence and threats resulted in more than 150,000 IDPs, from the last weeks of May and created serious obstacles for this investigation process, including difficulties in locating victims and witnesses.

The Provedor is still not in a position to confirm these reports or to clearly determine the number of people that the PDHJ believes to have been killed. Despite being unable to conclude this investigation at this time, the Provedor believes it is important to point out the nature of some of the human rights violations, which are being investigated:

Unlawful killing by both the PNTL and the F-FDTL

Illegal arrest and detention by F-FDTL

Ill-treatment in custody by both F-FDTL and PNTL

The Provedor’s investigations into these events and comprehensive report are critical, in particular because of the wide dissemination of unconfirmed reports. The Provedor, with its independent nature and legal powers, represents an important State mechanism to identify impartially and objectively the facts and those responsible. The PDHJ is finalizing its independent report on the incidents soon, with specific recommendations.