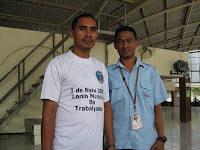 International Transport Workers' Federation Sacked aviation workers in Timor Leste win back pay 22 January 2009 - Aviation workers in the Democratic Republic of Timor Leste, who were sacked from a ground handling company, have won US$30,000 thanks to the concerted efforts of their union.

Some 14 workers, employed by Timor Aviation Services, which used to provide Dili Airport with ground handling services, were sacked after they made official complaints over workers being underpaid. The union representing the workers, the ITF-affiliated Sindicato Maritime, Energy and Transport Workers of Timor Leste (SMET-TL), embarked on a year-long struggle to see the workers win justice and Timor Aviation held accountable. As a result, the Timorese government awarded the workers more than US$30,000 in back pay. The company, which went out of business, had its assets seized by the government. These were then sold to pay the workers, all of whom are now employed for SDV which took over Dili airport's ground handling contracts. All the workers are employed under a collective bargaining agreement negotiated by SMET-TL.

Brant Connors, who works on the ITF Seafarers' Union Development Programme and visited Timor recently, reported: "While this victory was 100 per cent the result of efforts by Timorese union membership and union leadership, it should also be noted that international solidarity, specifically from the Maritime Union of Australia and the ITF, has played a large role in helping to develop the union movement in Timor Leste."