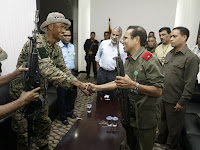 ETLJB 13 January 2009 SYDNEY - The Daily Times of India reported on 11 January 2009 that East Timorese President Jose Ramos-Horta said that he recently shook hands with the rebel soldier who shot him on 11 February 2008 but had not yet named him to prosecutors. The Daily Times quoted Horta as stating that ‘He (the shooter) still hasn't had the courage to tell the prosecutor it was him, and I haven't told the prosecutor because I hope that he will tell the court,’ said Horta. ‘I shook hands with him on December 26, which was my birthday.’

Horta said he had no doubt about the culprit. ‘I saw his face, his eyes, and I flashed back to February 11th, and that was the person,’ he said. Horta was only about 20 metres from his assailant when he was shot at with an AK-47. The president said he had seen the assailant and quickly turned, avoiding being shot in the chest and perhaps saving his own life.

‘I believe it was an irrational act on that morning,’ he said of the attack. ‘I just hope that he will step forward and say ‘yes, I did it’, and say why he did it.’ 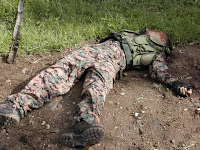 But as early as March 2008, The Australian reported that Mr Ramos Horta had named one of Major Alfredo Reinado's junior rebels, Marcelo Caetano, as the man who shot him twice on the morning of February 11.

The President's brother, Arsenio Ramos Horta, told The Australian the President had positively identified Mr Caetano as the man who shot him.

Caetano is a former member of the F-FDTL, the East Timorese army, who deserted with 600 other army "petitioners" in 2006. "Jose recognised him," said Arsenio Ramos Horta. "He didn't say anything as he fired his rifle. My brother was shot only 18m or 19m from where Marcelo was standing." Mr Caetano was with fellow rebel Amaro Soarez da Costa, known as Susar, near the gate of the President's compound that morning.

Image: (Middle): Carnage at the Presidential residential compound in Dili on 11 February 2008. Leopoldo Mendoca lies dead after being shot at close range by Presidential guards.
-----
Voices of East Timor