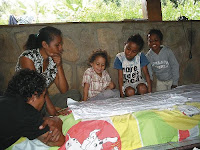 Southern Cross University vice chancellor Professor Paul Clark and Page MP Janelle Saffin made a visit to East Timor before Christmas to see if SCU could expand the courses they were offering there.

“It’s a small college teaching people about growing coffee. SCU staff have been over there working with them, giving them a good scientific basis for growing and also instructing on how to process the coffee further down the production chain... It’s an export and they need all the exports they can get,” Professor Clark said.

The other course SCU has been running is a diploma in community recovery. The course was developed by Gnibi College and has been translated intothe local language, Tetun, by East Timorese national and SCU Masters student Ina Bradridge.

Ms Bradridge helped to establish an orphanage for children orphaned through the civil war.

“Ina has not only been able to return to her own people and help teach them processes that engender their resilience, strength and recovery from the trauma of war and poverty that they have been subjected to, but she has also worked to forge an educational relationship between SCU and the Timor-Leste Government,” an SCU spokesperson said.

The diploma in community recovery has been offered a couple of times in Timor, taught by Ina and another Gnibi graduate, Judy Knox.

“The diploma program is well regarded by the (East Timorese) police and they wanted to see if it could be offered in their police academy. It allows people to better understand communities and how to assist after trauma,” Professor Clark said.

Also on the four-day trip was SCU’s dean of Arts and Science, Jenny Graham.

Professor Clark said the group met with President José Ramos Horta and Prime Minister Xanana Gusmao, as well as other ministers and heads of departments and Australian officials from agencies such as Ausaid.

“A lot of Australian aid goes to East Timor, something like $100 million a year. What we are trying to find is the right vehicle for us to do things,” Professor Clark said.
One issue President Ramos Horta was concerned about was water run off and the condition of the soil in some hilly parts of the country.

“He was interested to know what approach might be taken to arrest that and return that part of the island to production... So we’re hoping to send our forestry and geo-science guys early this year to assess and see what might be done.”

“Everybody knew her and was so pleased to see her,” he said.