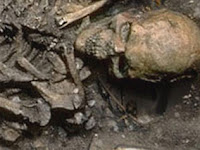 Fifty bodies found at 'Hell Market' in Vietnam Agence France-Presse 14 January 2009 12:50am - VIETNAMESE workers made a grisly find when they dug up more than 50 bodies, believed to be those of anti-French resistance fighters, on the site of the capital's "Hell Market".

The remains, many still fitted with rusted handcuffs and leg irons, were discovered by workers clearing the demolished market site where Hanoi authorities say they plan to build a road, the online VNExpress said.

"Am Phu'' (hell) market was later formally called the "19/12 Market'', to commemorate December 19, 1946, the start of the Vietnamese resistance against French forces reoccupying their colony after Japan's World War II occupation.

The market was built on the site of a mass grave where French forces interred the bodies of Vietnamese resistance fighters, political prisoners and war victims, said historian and legislator Duong Trung Quoc.

Up to 180,000 East Timorese died during the genocidal occupation of their homeland from 1975 - 1999 by Indonesia. The locations of many graves remain unknown and are a gruelling and painful legacy for families. See also Bones are key to truth behind notorious Timorese massacre and In search of a mass grave near Dili and East Timor - A Land of Graves: Bodies found near Dili airport

For accounts of crimes against humanity and other human rights abuses committed in East Timor, go to 1999 East Timor Crimes Against Humanity.
at Wednesday, January 14, 2009