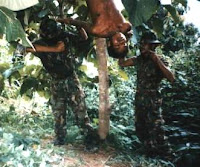 Investigations were carried out in all districts simultaneously with priority given to the most serious cases, such as murder. Last year, the SCIT completed investigations into over 30 cases. All the evidence and recommendations for these cases were sent to the Prosecutor-General’s Office for evaluation. The decision to file an indictment with the court will be made by the Prosecutor-General’s Office.

The work of the SCIT was well received by the community whose cooperation with the investigators was outstanding. In parallel to the investigations, the SCIT conducted a first round of community meetings in all districts to explain its work and mandate.