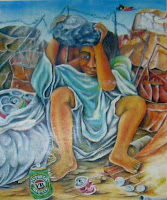 It is the latest in a series of corruption scandals to hit the country and, if the allegations are proven, could pose serious problems for Mr Gusmao, who has staked his reputation on cleaning up East Timor's bureaucracy and its tender system.

A spokeswoman for the Australian Department of Foreign Affairs and Trade said the Government took allegations of corruption seriously and was working closely with the East Timorese Government to increase accountability.

"The Australian aid program to East Timor is very carefully monitored and the aid program is subject to systematic internal and external audit to prevent and detect fraud," the spokeswoman said.

A protracted dispute over the corruption charge risks creating civil disorder in East Timor if supporters of the Fretilin opposition take to the streets to protest.

According to documents obtained by Fretilin, Mr Gusmao awarded a $US3.5 million ($4.4 million) contract for rice imports to Prima Foods, a company Fretilin says is partly owned by his daughter, Zenilda.

The contract was awarded under a $US45 million Government program to import basic foodstuffs.

"This is indicating very strongly that it's a collusion, nepotism and corruption," a Fretilin spokesman, Arsenio Bano, told the ABC. "How can a prime minister sign a multimillion-dollar contract with a company that his daughter is also a shareholder?"

The Prime Minister's office did not return calls yesterday but the President, Jose Ramos-Horta, declined to back his political ally, saying he would not intervene in the matter.

It awarded a $US400 million contract to a Chinese Government-owned company to build two power plants without calling for open tenders. Under the deal, East Timor will import expensive and highly polluting heavy oil, even though it is rich in natural gas.

The husband of the Justice Minister, Lucia Lobato, was reportedly awarded a lucrative contract to rebuild a prison and supply uniforms for guards. Ms Lobato, who is responsible for the prison system, is suing the journalist who broke the story.

There have also been allegations of dubious contracts awarded to build patrol boats and provide luxury cars to parliamentarians without an open tender.

Since taking office, Mr Gusmao has blamed Fretilin cadres installed in the bureaucracy for being behind rampant corruption. Last year he launched an anti-corruption drive, saying: "We need to take bold action and strong measures. This is not the time for small, incremental change."
at Saturday, June 27, 2009