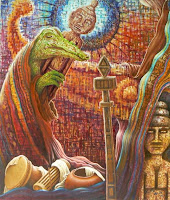 After hearing testimony from the defendant, the victim and witness, the court decided that the testimony was sufficient and then the judge provided the prosecution and the defence with an opportunity to make their final statements. The prosecution recommended for the court to find the defendants guilty of the charges pursuant to Article 351 (1) and Article 55 (1) of the Indonesian Penal Code.

The prosecution made this recommendation of sentence to deter members of the community, especially young people, to avoid acting in an arbitrary manner causing injury to others. Therefore the prosecution maintained the charges as set out in the indictment.

The defendant JD and 15 others were involving in the theft of a goat in Baucau last year. The Baucau District Court continued the trial of this case to hear testimony from the defendants. The hearing was delayed because according to the schedule issued by a court official it should have commenced at 2pm however it started at 4pm. JSMP observed that the defendants and victim were all present at the court before the hearing was scheduled to commence.

After the judge declared the hearing open to the public, the judge explained to both parties that this was the final hearing. The judge also reminded the parties that the court would issue a summons to the parties after the new penal code was validated on 8 June, which would replace the Indonesian Penal Code.

At the very close of the hearing Judge Edite P gave a stern reminder to the defendants that the offence in this case carries a maximum sentence of 7 years imprisonment, however the case had exceeded the statute of limitations and the parties had reached an amicable settlement whereby the defendants were willing to compensate the victim. For these reasons the court decided to acquit the defendants.

On the same day the local court also adjourned a minor criminal case (No. 53/ Crm.S/09/TDB). This case was adjourned because the victim and witness were not present in court without providing any prior notification. The judge stated that the trial would be adjourned and continued on 30 June because the victim and witness were absent and therefore the court summoned them to attend the trial on the next scheduled date.

The defendant BD was charged by the Public Prosecutor for the criminal act of damage to public property. On Thursday 4/6 the Baucau District Court continued the trial to examine witness testimony.

During this final hearing two witnesses provided similar testimony. The witness J testified that he did not see the defendant damage an electrical cable as mentioned in the charge, but heard about it several days later. This information was provided by the local committee (sub-district of Iliomar) when he went to repair a cable that had been damaged by the defendant.

The second witness A testified to the court that he also did not witness first hand the incident or know anything about the case, because at that time he was at home. This witness is an official from the State Electricity Service in the Sub-District of Iliomar, District of Lautem.

The judge decided that the witness testimony was sufficient and therefore asked the prosecution and defence to make their final statements orally to summarize the entire process. The prosecution recommended for the court to find the defendant guilty as charged. The defendant asked the court to consider a suspended sentence. Finally at 5pm judge Edite Palmira read out the decision in consideration of the fact that the defendant lives in a remote area and to avoid making the defendant come back to court again. The judge decided that the defendant B had in fact damaged the electricity cable in Fuat Village, Iliomar Sub-District, Lautem District in 2003 that left 7 houses in that village without electricity for two nights.

The decision also mentioned that the defendant had damaged the electricity cable belonging to the State Electricity Service because he had been asked by an official of the Electricity Service to pay $10, because he had not paid his bill for several months. The decision also stated that the defendant committed the aforementioned act on his own free will. The decision was issued after the court considered the testimony of the witnesses and other evidence gathered throughout the trial. Based on these facts the court sentenced the defendant to 6 months imprisonment to be suspended for one year pursuant to Article 14 of the Indonesian Penal Code.

After announcing the decision the judge explained to the defendant that the court had issued a very lenient sentence in this case because it has passed its statute of limitations (2003). In addition to the suspended sentence the court also ordered the defendant to pay court costs of $ 5.

The victim testified about the chronology of events exactly as they were depicted in the indictment. This was also the case with the testimony provided by witness N to the court. The witness said that he saw the incident first hand because at that time he was returning from church with the victim. The witness also said that he restrained the defendant when he was trying to burn the victim until a member of PNTL arrived.

The prosecutor stated that the testimony of the victim and witness corresponded exactly with the charges in the indictment. Therefore the prosecutor had no doubt about the facts and requested for the court to find the defendant guilty as charged, namely for committing the crime of attempted murder.

The defence stated that the article used by the prosecutor against the defendant did not correspond with the facts, because there was no mention of a plan to commit the murder as contained in Article 340 of the Indonesian Penal Code, or any premeditation to commit the crime. The public defender appointed to represent the defendant also told the court that the defendant had admitted his actions and therefore he asked the court to decide the case in the best interests of justice.