Tempo Semanal 27 June 2009 - East Timor Prime Minister Signs Contract with Husband of Minister of Justice - According to the below contract for Supply of High Speed Diesal Fuel for EDTL, which is dated 19 September 2007 but not signed until one year later on 19 September 2008, the Supplier Pualaka Petroleo has to supply fuel to the Government power utility EDTL from 1 October 2008 until 31 March 2009.

This contract was signed by the Prime Minister Kay Rala Xanana Gusmao on behalf of the Government of Timor-Leste and by Americo "Pualaka" Lopes, Executive Director of Pualaka Petroleo with a 30% share of the company.

Mr. Lopes is the husband of Minister of Justice, Lucia Lobato, a leading member of the PSD party, and a key political ally of the Prime Minister in the AMP Coalition Government. They share a personal connection as Prime Minister Xanana is the godfather of Lopes and Lobato's son. 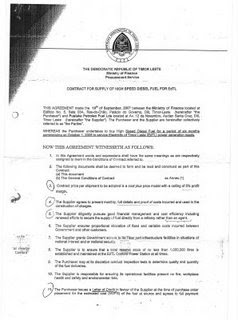 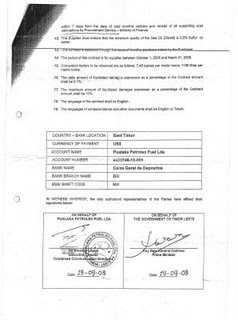 According to the below invoice dated 3 April 2009, from Mr. Lopes to the Director of Procurement in the Ministry of Finance, Pualaka Petroleo billed the Government $1,473,360.00 for 1,754,000 litres of diesel fuel provided during the contract period.

It is not yet clear what the law states on this matter, however there are questions raised by these documents. 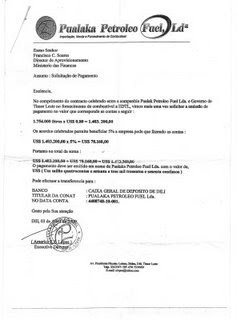 AMP is a rubish government which is full with corruption, nepotism and collution, and also luck of experience.However, they always trying to protect their self by using fals and irational argument.

This is the real evidence of corruption conspiracy amongs the members of cabinet and prime minister.

Who still five cents out!!!!!! but my doughter and my ally crony keep going....... before the end of my mandate we will be richest people in this country and the poorest people in the mountain leave them crying and struggling to find a plate of food to feed their families.