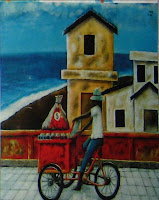 Horta decides not to promulgate village chiefs election law Radio Televisaun Timor Leste 23 June 2009 - Following a long consultation with the lawyers, the Government, the Parliament and the UN, President Horta Jose Ramos Horta has decided to not promulgate the village chiefs election law and that he would send it to the Court of Appeal for constitutional interpretation.