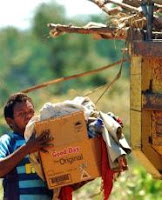 By Matt Crook – METINARO, East Timor (AFP) — On a sweltering day at a camp for displaced people outside East Timor's capital, children play excitedly in the dust as their parents pack their meagre possessions for the trip home.

A girl holds up a fragment of a DVD -- "Rambo" -- a reminder of how more than 9,000 people became marooned in this camp after a bloody spasm of factional fighting between security forces in 2006.

The unrest displaced an estimated 100,000 people, brought the new country to the brink of civil war and triggered the second international peacekeeping intervention to East Timor in less than a decade.

Authorities are now confident the security situation is stable, so the camps dotted around Dili have been closing one by one.

The last to close is Metinaro, but many of the IDPs (internally displaced persons) here are anxious about their homecoming.

"It's not clear what will happen. We're going to follow the government programme, but we still ask for security," said Gonzalo Gusmao, 40, who fled Becora village near Dili with his wife, daughter and about a dozen relatives.

"It's not clear if, when we arrive back there, some of the neighbours or people living in that area will accept us," he said.

With piglets, puppies and children darting all around her, 40-year-old Bemvinda Freitas said that while she's happy to be going home, she's a little nervous about how people in her village of Becora will react.

"I'm a bit unhappy by the rejections from that village, but on the other hand I'm excited to be returning to my home," said the mother-of-four.

"I have no idea about why they reject us because we are the victims of the crisis. I hope as citizens that now we will have peace in our country."

International aid workers have been preparing the ground by mediating between the camp dwellers and those who remained in the villages.

Mediation has also been used to settle disputes between IDPs and squatters who have been occupying their vacant homes.

In the Camea neighbourhood of Dili, residents were reluctant to accept returning IDPs due to safety concerns resulting from long-standing land and trade disputes, aid workers said.

A series of meetings organised by the International Organization for Migration (IOM), the Social Solidarity Ministry and the United Nations Development Programme helped allay the fears of both groups and saw the setting up of two new police posts in the area.

IOM camp coordinator Brad Mellicker said the homecoming tensions were common to many displacement situations around the world.

"We've been doing mediation and dialogue in the camp and communities, especially when the IDPs are going back to areas where there have been some acute problems related to the return," he said.

"There have been about 150 families total so far that have left (the Metinaro camp). There's been nothing beyond the usual tensions that are inherent in movement."

A delay in verifying the state of their homes, to determine how much money they are entitled to as part of a resettlement package, meant the IDPs living in Metinaro had to wait a little longer than expected.

But a few minutes' drive out of the camp, police-led convoys of dump trucks crammed with radios, clothes, tools, dogs, people and bundles of wood are now making the slow journey home.

It will likely take another four weeks before the camp is finally closed.

Meanwhile, there's one last step for Daniel Fernandes, 25, to complete. Families have to sign-off so they can collect their resettlement package -- up to 4,500 dollars per family.

"We have all our belongings in two trucks. What I feel now is expectation about going back to my own house," said Freitas, part of a four-family, 25-person contingent.

For Gusmao, the task of rebuilding his life with his family is only just beginning.

"My house was really badly damaged during the crisis -- we're going to fix it with the resettlement money," he said.