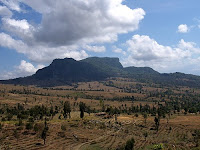 JSMP 25 June 2009 DILI Three Defendants in the Watu-Lari Case Sentenced to Imprisonment, Two Defendants Acquitted - The Uato-Lari case is one of a group of cases that shook Timor-Leste after the parliamentary elections 2007. The case concerns the involvement of five defendants in rioting and property damage in the district of Viqueque.

Each of the five defendants in the Uato-Lari case was charged with:

(a) committing violence against persons and property (section 170 of the Indonesian Penal Code); and

Like in other cases, the victims and the community at large have keenly awaited the court’s decision, which was handed down in the Baucau District Court on Monday 8 June. As close friends and family of the defendants were present in court, and PNTL and UNPOL officers were on standby to deal with possible disturbances or undesirable incidents Several observers from international and national NGOs were also present. The observers arrived several hours early in anticipation of the decision being handed down. As this is regarded a serious case, a wide range of people were focused on the trial.

The four page decision was read out by presiding judge Edite Palmira in Tetum to the five defendants who were sitting in a row facing the panel of judges. The decision referred to the facts revealed during the trial, and to the testimony provided by the parties and witnesses.

The court found that within the five defendants some had been involved in rioting in Viqueque that resulted in the burning of hundreds of houses and other significant damage to property. Many people were forced to flee, because they had lost their homes.

The court also found that on 8 August 2007 the defendants were present at the scene of the crime, and incited others to burn houses and damaged the property of others.

However, the court found that it had not been proven beyond a reasonable doubt that all five defendants damaged property and committed arson as outlined in the charges.

JSMP has monitored this case for some time, and notes that the court’s decision is more lenient that the recommendation of sentence made orally by the public prosecutor during the last hearing of this case on 6 May 2009. The prosecutor asked the court to sentence the defendants GD and D in accordance with the severity of their crime, and recommended a sentence of no less than five years and six months imprisonment. The prosecutor also recommended that the remaining defendants be given more lenient sentences not in excess of 5 years imprisonment.

In addition to the three year sentence, the court also ordered the three convicted defendants to pay court costs of $5. After hearing the decision the defendants left the court room, spoke with their lawyer Dr. Arlindo Sanches, and were advised to return to their respective homes.

JSMP has not yet confirmed if the convicted persons intend to lodge an appeal, or if they will accept the three year sentence. However, JSMP notes that in light of the leniency of sentence handed down, the public prosecutor may be likely to lodge an appeal against the court’s decision.