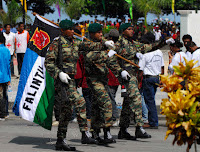 "Today in a military ceremony and parade, the Timor Leste government has symbolically disbanded armed wing Falintil which for 24 years was... in the forests to fight for Timor Leste's independence," President Jose Ramos-Horta said, using to the country's formal name.

"They are admirable and brave warriors, have strong faith, and did not think a lot about... risks. They (survived) from one year to another to sing the dream of independence," Ramos-Horta said.

The government honoured 236 men and women from the armed wing at the ceremony, which was also attended by several officials from Indonesia.

East Timor, a former Portuguese colony, was occupied by Indonesia for 24 years from 1975, a period marked by widespread human rights abuses leading to the deaths of up to 200,000 people.

The tiny nation gained formal independence in 2002 after winning its freedom in a 1999 UN-backed referendum marred by violence.

A reconciliation commission established jointly by East Timor and Indonesia found in 2008 that while gross human rights were committed by Indonesian forces, there should be no more trials and no further arrests.

East Timor has a wealth of energy resources but remains one of the poorest countries in Asia, with most people dependent on foreign aid.
-----
ETLJB Editor's Note See also The Function and Role of the Armed Forces in National Defence on the East Timor Law Journal which includes a discussion of the name FALINTIL in the East Timor Defence Force's official title and the problems that generated.