MPs condemn violence in Zumalai
Suara Timor Lorosae - MPs in the Parliament have strongly condemned the recent violence which has left a police officer, who is also ex-guerilla independence fighter, dead. Teki Diaz was killed during a martial art clubs clash which took place on Sunday (14/8) in Zumalai. Parliamentary President Fernando Lasama de Araujo said he was very concerned about the clash and called for an investigation into the case for legal proceedings. In regard to the case, Lasama has contacted Kovalima district administrator and other local authorities to follow the situation in the area.

Lasama is concerned about murder of police officer in Zumalai
Televizaun Timor-Leste - The Parliamentary President Fernando Lasama de Araujo is concerned about the recent murder of a police officer in Zumalai, the southern district of Kovalima. Lasama called on the Timorese National Police (PNTL) in the area to restore the situation and take the criminals to the court for legal proceedings. "I am concerned about this situation. PNTL officers and the Timorese Defence Force (F-FDTL) soldiers have been deployed in the area to restore situation. "I am calling on the local residents to cooperate with them. I am also calling on the courts and prosecutors to pay attention to this case to process the criminals who have killed Teki Dias and his brother in-law," Lasama said. Diaz was attacked and stabbed to his chest and died at the scene during the recent clash involving martial art clubs in Zumalai.

Alkatiri concerned about Kovalima case
Suara Timor Lorosae - Fretilin Secretary-General Mari Alkatiri said he was concerned about the recent acts of violence in the village of Galitas, Zumalai sub district, the southern district of Kovalima. He called on the competent authorities to hold an investigation into the case to uncover the cause of the clash. This case should be investigated and should be processed legally in the courts, Alkatiri said. Timor-Leste is under the rule of law; therefore the state should seek a solution to resolve this case, he said. According to the Government's report, more than ten houses were set on fire, while the UN's report stated five houses were burnt and another source said more than 70 houses were set on fire.

State has right to use force to stop violence: Alkatiri
Televizaun Timor-Leste - The Constitution of Timor-Leste states that the state has absolute rights to use force to stop violence, says Secretary of General of Fretili. Mari Alkatiri said Fretilin was concerned about the current situation in Kovalima because the there were many local residents who had become victims because their houses were destroyed. He stressed that the state should use force to stop such acts of violence. "The state has a legitimate right to use force to stop violence and this is outlined in the law and constitution." "If the state does not do this then it is total anarchy. This is not a dictatorship but democracy does not mean all people can do what they want and commit violence." "When committing crimes means we breach the law. It is important to hold an investigation into the case to uncover what the motive is. The criminals should be taken to the courts and this case should be resolved trough the legal process," Alkatiri said. He also called on all the people to put hands together to move forward with the country's national development.

Police set up five security posts in Zumalai
Radio Timor-Leste - Kovalima district police has set up five security posts in Zumalai to prevent another act of violence in the area, Kovalima District Police Deputy Commander, Inacio Santos said. The five security posts were set up to help provide security for the local residents in the area so that they could remain clam after the recent clash, he said. Santos said Kovalima police is being boosted by Ainaro and Manufahi police, and the special police force. The police have captured a number of people who are suspected of being engaged in killing a police officer during the clash. He added that the police have identified the suspect who killed the police officer and are waiting for an arrest warrant from the court.

F-FDTL deployed in Kovalima: Gusmao
Diario Nacional - Prime Minister Xanana Gusmao who is also minister for defence and security has called on the Timorese Defence Force (F-FDTL) to help support the national police in restoring order in Zumalai. Gusmao made the call regarding the recent clash involving martial art clubs in Zumalai in the western District of Kovalima. State Secretary for Defence should take a necessary action to deploy F-FDTL soldiers in the area, he said. In response, State Secretary for Defence Julio Thomas Pinto said F-FDTL had already deployed in Zumalai to help support PNTL officers there.

PNTL calls for F-FDTL support
Suara Timor Loro Sae - The Timorese National Police (PNTL) has called on the Timorese National Defence Force to help support them in restoring order in the villages in Kovalima after violence  broke out in the area. Speaking to journalists, State Secretary for Defecse Julio Thomas Pinto said they had deployed F-FDTL soldiers in the area to help support the police. "We have a big problem in Zumalai. Our police could not respond to the situation alone." "Therefore PNTL has officially requested F-FDTL to help restore the situation. F-FDTL soldiers are now there," he said. He added that F-FDTL and PNTL should help support each other if similar cases appear in the country.

Police and defence force secure Kovalima sub villages
Independente - Calm has been restored to two sub villages in Kovalima district after a violent weekend conflict that left a Timorese National Police (PNTL) officer killed and a civilian in hospital. On Sunday night, hours after the clash between martial art clubs, 70 houses were burnt down in the sub villages of Tasilin and Galitas in the sub district of Jumalai. PNTL Operational Commander Eugenio Pereira said the residents who had lost their houses were staying in the local church and school buildings. Pereira said the a Timorese Defence Force (F-FDTL) and PNTL team arrived on Monday (15/8) to secure the sub villages, with help from Bobonaro and Ainaro District Police. Police will search for the offenders after the situation has been normalised, Pereira said.

PNTL deploys special force to hunt down offenders
Diario Nacional - The Timorese National Police (PNTL) Operational Commander Eugenio Pereira said PNTL had deployed a special police force team to hunt down the offenders who burnt down the local residents' houses on Sunday night. "Yesterday I coordinated with special police commander to intervene into the case based on the PNTL commander's instruction," he said. Pereira affirmed that the special police force officers were on board Australian Defence Force's black hawk helicopters to Zumalai to restore order. PNTL is also supported by the Timorese Defence Force (F-FDTL) soldiers and are now in the villages of Zumalai. 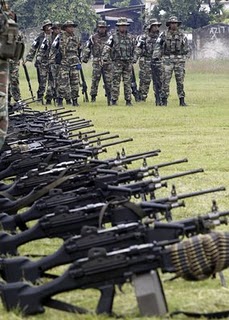 Government to purchase 500 guns for F-FDTL
Independente - According to the plan, the Government is going to purchase 500 high-powered guns to the Timorese Defence Force (F-FDTL), State Secretary for Defence, Julio Thomas Pinto said. In response, Prime Minister Xanana Gusmao said he agreed with the proposed weapon purchase, but should purchase first 250 this year and the remaining 250 could be purchased next year. Gusmao made the comments during a budget review discussion on Tuesday (16/8), in Dili. "It is better for you to buy 250 weapons first and next year you can buy other 205," PM Gusmao said. According to Gusmao, the numbers of weapons to be purchased should be reduced to 2050 this year as the Government prefers using the budget for the Government's top priorities.

AMP should not hide from justice, says Alkatiri
Timornewsline  - Secretary General of Fretilin Party, Mari Alkatiri said the Parliamentary Majority alliance (AMP) Government should not hide from justice, as this was not good in a democratic country. Alkatiri was referring to Prime Minister Xanana Gusmao's recent statement saying justice in Timor-Leste is like justice in the colonial time and a dictatorship regime. Alktiri also said Gusmao's comment seemed to be a self-defence and defence for the Government officials who are facing legal charges. Alkatiri added such comments were not good for the rule of law and justice in the country, as all policies are made to be responsible for cooperating with justice not against the justice. "For me he is trying to defend himself and his Government officials who are currently facing legal charges," Alkatiri sid. He added the Government officials should be ready to face investigation regarding corruption within the Government institutions.
at Thursday, August 18, 2011