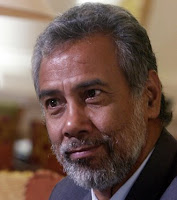 By Steve Holland, Stephanie March for Radio Australia - The father of East Timorese independence, Xanana Gusmao, is at the centre of a new corruption scandal.

Prime Minister Gusmao signed-off on a multi-million dollar government contract to a company in which his daughter was a major shareholder.

An investigation by ABC's Radio Australia has found Prima Food last year won a government contract to supply rice worth $US3.5 million ($4.3 million).

Radio Australia has also confirmed that the wife of another senior minister has profited from government tenders.

The country's procurement law bans "agents of the administration", politicians and bureaucrats from awarding government contracts to businesses associated with close family members.

"It's absolutely a strong indication of corruption, he has violated Timor Law, and before it goes to the courts the prime minister should resign," Mr Bano said.

However, a spokeswoman for the government confirmed to Radio Australia that Zenilda Gusmao was a shareholder of Prima Food.

In a statement, the spokeswoman said: "The government has always been transparent on these contracts and went to enormous lengths to establish a fair and equitable environment for the private sector".

Mr Bano says he has approached the government on a regular basis since December last year, seeking information about companies linked to people related to ministers, but the government refused to supply the information.

"Even when we ask for a simple request, such as a request about how much rice is being transported into Timor ... they ignore Parliament," he said.

Zenilda Gusmao is not the only businesswoman in East Timor with a close relative in government.

Kathleen Goncalves, wife of East Timor's Minister of Economic Development, Joao Goncalves, is connected to at least three companies that have been awarded multi-million dollar government contracts approved by the Prime Minister.

Mrs Goncalves declined an invitation to be interviewed, but in a statement a spokeswoman for the East Timorese government defended her involvement.

"She (Kathleen Goncalves) has been in business in Timor since 1999 importing rice and was an authorised vendor for previous governments [sic], including the Fretilin Government and the Gusmao Government," the statement said.

Joao Goncalves says he did not know the names of his wife's companies or which ones had secured multi-million dollar government contracts.

The companies connected to Kathleen Goncalves, along with Prima Food, are listed on a government list of 16 businesses that last year secured government rice contracts worth $US56 million.

That money came from the country's Economic Stabilisation Fund and was distributed as part of food security measures aimed at ensuring the population had sufficient rice supplies.

Mr Gusmao played a key role in his country's 25-year struggle for independence from Indonesia.

He became East Timor's first president in 2002 and was elected Prime Minister in 2007.

It is very sad news for all the people in Timor-Leste, specially coalition AMP government and he`s individual as father of East-Timor freedom fighter. This allegation would destroying all his leadership as charismatics leader and revolusioner. And this is also the rigth time for him to say good bye to his followers coalition. I feel very sad about over all corruption in his AMP government were caused by opportunist and autonomist whose sorrouding him. To govern not a easy task as we think and we talk, but this is a very very difficult things that are faced by many leaders arround the world.A