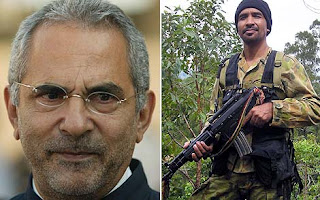 TRAGEDY INCRIMINATE INNOCENT AND LIE WHEN IN COURT
It was more or less always the public that the accusing circumstances that were placed on the accused of 11 February harmed several violations the legality or at least the dubious procedures on the part of PGR, Public Prosecutor's Office. This was the beginning of an argument defences that the indictment, the Prosecutor, always denied.

The numerous illegalities or dubious procedures are public and even were greatly publicised. But the rebels are presented in the first place to the Prime Minister Gusmão instead of being presented to the judges, to Court. Progress at the time that such a manoeuvre was due to the fact that Gusmão wishing to put the necessary pressures to manipulate which the rebels should declare in Court. The reasons related and relate to the fact that Gusmão can be one of responsible of 11 February 2008, belief that is increasingly in greater numbers of the population of Timor Leste and observers who have been to monitor the developments in the whole process in parts which issued to be familiar with.

The arguments are valid for which it is argued that the attack to Gusmão, Balibar, was a huge farce, as is becoming increasingly clear that Alfredo Reinaldo was the victim of a treacherous scenery for appeal to Dili, home of PR Ramos Horta, the order to assassinate. Adding about this more some condiments, certainly related to the assassination PR Ramos Horta, attempted action but that intervention was foiled by the relevant of first aid provided by a Portugal medical team in service in Timor Leste and Australian hospital doctors of that military force, for where Ramos Horta was transported. There he has been stabilized and transferred to a hospital in Darwin.

Without any doubt that apparently the coup of 11 February foresaw to kill two rabbits with one bullet, Alfredo Reinaldo, is one of contestant of the Gusmão actions, which threatened to disclose the responsibilities of the former President of The Republic and now Prime Minister, in 2006 coup d'état, but also José Ramos Horta, who had said go to convene for early elections agree with the demands of the opposition, prominently the Fretilin.

Currently the expectation that some truth are revealed about what really happened and who are actually responsible for events February 11, since the trial from July in Dili has been demonstrated that are in the dock the wrong people and not the responsible for all this fateful tragic day. The views are categorical that until now the Prosecutor was unable to prove the guilt of accused and has been showing the inconsistency of their primary arguments and take a position of not reminiscence, abandonment of their thesis, by the simple fact that cannot prove that there was in fact attempt murder of Horta and Gusmão in concerted attacks by that were appropriate accused and who are currently sitting in the dock and in prison of Becora.

Despite the PGR, Longuinhos Monteiro in 2008, have omitted and contaminated evidence, have manipulated criminal process, their arguments are crumbling and increasingly losing credibility, both public opinion, either before the Court.

In fact, the Prosecutor, which is taking charge, Felismino Cardoso Garcia, appears to be the victim of spectacle and lies that PGR Longuinhos "pasted" the process by conveniences that should be cleared for the sake of Justice and the national interest. Flawed and improper procedures has the defence been pointing several strands, without Prosecution will be able to submit valid and credible arguments that actually is not accusing innocent to hide real responsible in this final process.

On 20 July, practically at the beginning of the trial of this case, the Defence submitted application in multiple requests, having Felismino Garcia pointed to all items required something like a theatrical operation by defences, that the Court should not correspond and consent to.
In fact, surprisingly, this magistrate Felismino, "employee" of Longuinhos, prepared document which contradicted the defendant defences. Within the request of the defence was requested, Requirement 4, paragraph d, "which are forwarded (the Court) photographs taken during the autopsy performed either in the body of Alfredo Reinaldo either Leopoldino body exposed … "

The defendant argued the magistrate Felismino Garcia, in paragraph F question 7: "At no time was communicated to the Prosecutor that while carried on the autopsy, composite team and led by Drs. Nurul and Rosa Pentón, photographed such acts.” "Moreover, adding that at no time was reported that were made photos of exact moments and examinations, Prosecutors have not received "


Big liar, we must consider the Dr. Felismino. Exactly here below you can see the pictures taken during the Alfredo Reinaldo autopsy and is disgusting and unacceptable spectacle that surrounds the corpse of major murdered.

Irrefutable proof that this "employee" following the path of Longuinhos knew the fallacy in the document in which he says to the Court that there was no photographs of autopsy, knowing he also participated in the sad spectacle of autopsy and that is documented in photography … photos that he said there did not exist, lied shamelessly, and we present below.

Before this we must ask ourselves that confidence in the PGR of Longuinhos Monteiro throughout this process? Why current PGR continued after he has gone off with the same thesis decadent and untruthful? Because aren't certain those who point to the suspicion of guilt of Gusmão on 11 February events, where Longuinhos Monteiro had the merit of contaminating all the process, infecting of lies and falsehoods to conceal the true responsible? Because we must not believe these arguments when everything is pointing to a farce mounted by elements obedient to lie at the expense of truth and justice? Why it is not investigate the strands that still huge suspicions before certain evidence?

If the Prosecutor Felismino Garcia lied shamelessly in this example, is it recognized that credibility? Is it him and PGR? What is the truth of 11 February, hidden by lies which have been orchestrated by Longuinhos, Gusmão confidence man?

So trust, he was appointed commander and Police all-powerful. A Gusmão slave for all service, as was demonstrated recently in release the killer Martenus Bere, for example.

In addition to all this nonsense and respect due to the dignity of Alfredo Reinaldo and Exposto cadavers, demonstrated by actors “enjoyment “in the sad spectacle photographed. For lack of scruples, until this Felismino Garcia joined "party" and as the bandit Longuinhos that denied in court the existence of proving the macabre repulsive display in that participated along with medical professionals and also violated the dead in precepts that deserve and to the Timorese is sacred (Lulik).

After seeing and know the truth about this “small episode "– there are others -who else will believe in the Public Prosecutor PGR of Horta and Gusmao? When the truth and the presence of real responsibility in the dock?
at Saturday, November 14, 2009