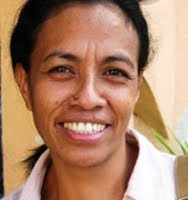 On Friday afternoon 30 October 2009 the Indonesian Embassy called the Minister of Justice Lucia Lobato to inform her that Maternus Bere has been sent back to Indonesia.


'On 30th, last Friday, I have received information from the Indonesian Embassy which to informed the Government that Maternus Bere's health situation was getting worse,' said Lucia Lobato.

The Minister of Jusktice tried to convince the public that it was for humanitarian reasons that the Government let Bere out of prison.

'Because of the Humanitarian reason I think we can concede to this situation. Once again after we have past through a long process I would like appeal to all the Timorese people for their understanding to see this case as the one which is in the national interest.'

Lobato stated that 'He is suffering from three or four kinds of illness such as kidney ailments, Tifu Afudu (Portuguese language), malaria and high blood pressure and the Indonesians were very preoccupied with his health situation also the medical team have went to do test in the embassy,' Lucia said

'The Indonesian Government placed alot of attention on the matter as bere is their citizen so with urgency they have evacuated Maternus Bere out of Timor-Leste into Indonesia on Friday last week.'

However, the Minister of Justice would not give details at the press conference stating that, 'there were a lot of concerns and the Government have to give full information to the public which willing to know the last details information of maternus Bere's case.'

She reiterated that, 'at this moment Maternus Bere is in Indonesia and he has left Timor-Leste on 30 October last and he is no longer in the Indonesian Embassy.'

'We all know that we have dealt with a big issue in regard to Maternus Beres Case,' Justice Minister Lucia Lobato informed journalist in Dili today.

She said that, 'We have confronted a difficult situation.' But she praised the ability of Timorese to solving their own problem as, 'Once again it shows that Timor-Leste can resolve our own problem even we have a lot of challenges but we can overcome this situation.'

The Opposition party in the National Parliament alleged that the Government help Martenus Bere to escape from justice.

Minister Lobato rejected to give any comment to the allegations and she only referred to the Prime Minister Gusmao's statement before the Parliament during the motion debate last month. 'I think I will not come here to explain again this case because we all must informed by the PM's declaration before the parliament,' Lucia said.

Lucia Lobato doesn't know when Maternus Bere left Timor Leste but she only confirmed that she was informed by the Indonesian Embassy in Dili on Friday Last week.

'I don't know whether he has left on Friday morning or he was still in Dili when they informed me.' She told the journalists if they want more details to ask the Indonesian Embassy.

But the civil society and youth groups disagree with the government position.

Image added by ETLJB: A lawyer who knows not the law. East Timor's Justice Minister Lucia Lobato sacrifices justice for political expediency and complicit in actions by the Government of East Timor that violated international law and East Timorese law in releasing indicted crimes against humanity suspect form detention.
at Friday, November 06, 2009