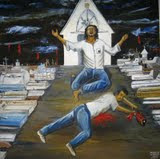 By GUIDO GOULART Associated Press Writer - DILI, EastTimor, Nov 12 (AP) - Families in East Timor appealed Thursday to their own government and Indonesian authorities to help recover the bodies of dozens of loved ones still missing 18 years after being gunned down in a cemetery during Jakarta's two-decade rule.

The appeal came as thousands of people gathered for a service at the Santa Cruz graveyard in downtown Dili, Timor's capital, where Indonesian troops opened fire on pro-independence demonstrators on Nov. 12, 1991, killing hundreds.

Mothers, fathers, sisters and brothers clutched photos of dead relatives on Thursday, holding flowers and candles as they set out from the Motael Catholic church singing Hymns, saying prayers and weeping.

"My son is still missing," said 71-year-old Maria Lourenca, whose boy Antonio was a junior high school student at the time. "I want justice for his death. He was too young. The Indonesian soldiers who shot him should be punished."

Dramatic footage of the shooting and the wounded was captured by Western journalists and smuggled out of East Timor.

Some of the gunmen were clearly captured on video, but no one has ever been prosecuted for the killings. Dozens of victims remain missing nearly a decade after the end of a 24-year Indonesian occupation that wiped out a third of Timor's population.

The failure to find victims of past crimes highlights East Timor's ongoing struggle to come to terms with its violent history that includes more than 250 years as a Portuguese colony before it became an Indonesian province. Some of roughly 174,000 people who died during Jakarta's rule were buried in mass graves that have never been discovered or exhumed.

Mourner Terezinha da Silva Ximenes, 65, asked for help to locate the bodies of 65 missing victims, including her son.

"I beg our leaders ... to approach Indonesian authorities to show us the graves of my son and his other comrades so that we can give them a humane burial in accordance with our beliefs, our religion and our Timorese culture."

President Jose Ramos-Horta and Prime Minister Xanana Gusmao, icons of the country's independence movement who attended Thursday's service, have rejected calls to put on trial more than 300 suspects, most of whom are believed to be at large in Indonesia.

Court hearings would open old wounds and may undermine the sensitive relationship with Indonesia for the tiny nation of 1.2 million that only gained independence seven years ago.

East Timor recently released an alleged militia leader accused in a 2003 U.N. indictment of murdering women, children and priests at a church in the town of Suai. Gusmao ordered Maternus Bere's handover, in what rights groups say was an illegal act that violated the constitution.

The decision was made during intense negotiations with Indonesia, which insisted Bere be let go.

He was brought to the Indonesian Embassy on Aug. 30 during celebrations marking the 10th anniversary of East Timor's independence vote.

Bere, whose trial had been under preparation by prosecutors, was freed without consulting judges or a court hearing, highlighting the weakness of East Timor's infant legal system. The case is being investigated by the Supreme Court.
at Sunday, November 15, 2009