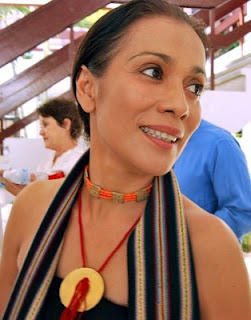 Tempo Semanal 14 July 2009 After a year five month and two days the case of February 11th 2008 occurred on Monday 13 July 2009 the 28 suspects will present to the Dili districts court. Among those 28 is a Timorese born Australian Angelita Pires the then lover of Alfredo Reinado alves who was killed on the day attacked to the President residence on February 11. John F. Kennedy Boulevard in Metiaut Dili left injured to the Timorese the 1996 co Peace Price winner DR. Jose Ramos Horta.

Angelita Pires was dressed up the Timorese traditional weaving accompany by two of her lawyer one from Brasil and the other one is Jon Tippet from the queens council based in Darwin. Yesterday in an interview with Tempo Semanal Jon said, "We prepared as we can be but we only get the process or document as it is called about last Tuesday week and we been under a lot of pressure to prepared this trial and it is very very large case. And unfortunately we only allowed to see the prosecution about two weeks ago and we had have to photo copies 25 volumes over 5000 pages of material.

It's been very very difficult process to do in very short period of time. Unfortunately we were not given access to the document earlier as we should have been as a result we have been put under enormous pressure. So when you say prepared? We prepared as you can be in two weeks for a trial really requires three to four months preparations."

After seen those accusation document the Darwin based lawyer is now ready to fight for Ms pires release. "My client is very innocent. I have seen the material and she is innocent."

When question how much confidence he does has in terms to free his claim Mr. Jon said, "Well I am very optimistic because there is no evidence that connect her to any conspiracy to attempt to kill the President of the Timor Leste. Nor there is any evidence that connects her with any events that occurred on February 11th 2008."

Angelita Pires was the lover of Alfredo Reinado and jon said, "that's her only connection unfortunately she has been charge on the bases of evidence that really is admissible and for the most part is just made up."

The government of Timor leste in several occasions made statement to public accused miss Pires is one of the main suspect in the February 11th 2008 events in President residence which injured the East Timor President in that morning. "Unfortunately the government has not awaited the outcome of a prover inquiry and court case before providing an opinion to the public. It would appeared that the views express by the government are not supported by the forensic material and there are many questions raised in this case about how this particular incident unfolded?, why unfolded? Who was involved? And what shorts of conspiracy was behind the shooting and the death of Alfredo Reinado and others. So my concern is that this case expose that evidence that the people of Timor Leste and of course other interested people in other countries around the world particularly Australia are provided with the evidence and when they are the evidence disclose very different story to the one that has been rely upon in many places and by people in position in power to day," said Jon.

Ms. Pires shouted out in local language saying, "I will never ever forget Major Reinado and I always remember of him." Angelita Pires been has a number of charges first is attempt to kill the president of Timor Leste, she also have 19 charge of attempt of homicide related to the shot out in the area of President Residence and she face two counts of causing damages to the government poverty namely two vehicles were heat by gun fired during the shot out.

"I am innocent as I said a thousand times before I am innocent and I got good legal team and yeah I am ready to face the court," Angelita told Tempo Semanal in Dili a day before the court hearing.

She has accuse the Timorese leaders and International people in East Timor has put her in a very difficult situation and she has suffer morally and physically. "I was defamed and I was pronouncing guilty before I even had a hearing. The whole cases have been poison. How can you as a leader prosecute some body? You not the judges. Leave it to the court. I want to leave it to the court and I want to follow through to the court, if this court I want the world to see. If this court really care out justice? Really is based on the truth? Or is this court the shame sample that the same unworkable or ill judicial system that existing in Timor leste right now. Let's see this is a trial for every body and this is not about me any more but this is about one million people who want truth and justice whom really believe that the country should have a decent justice system. I am not going to let it down I want to see it through."

When Tempo Semanal asked her whether she can indicate who are the leaders she is referring to but Ms. Pires rejected. "I don't want to name names because I don't think its correct to do so but I think the world knows and I think what was done wasn't done entirely on behalf of Timorese part, but I think it was to some extend accomplished by the international community, by international entities so I want justice. I want to be indamines for what I went through and I want to make sure that no other Timorese women, no other child no other Timorese man goes through what three of us through. It's wrong. It's wrong to endorse and to fund the systems that don't work. Those are corrupts and served only to prejudice the people.

Angelita alleged the Timorese justice is not working so she appeal to the Australian taxpayers to remind the Australian Government to review it's funding to Timor Leste justice sector or even to cut the support because it's a waste of taxpayer money. Angelita has co citizenship. She was born in east Timor and grows up in Australia. "I am an Australian citizen as well as Timorese citizen and I had a lot of help from the Australian council here and I had funding from the Attorney General in Australia that a decent grant that's helps me to get the right legal council, so I am happy," she informed.

Jon confesses that he has access to some of the evidence which make him confidence that Ms Pires may free from all the accusation. "Well the evidence seems to point to different stories to the one which people have been receiving through the media certainly from the sources in the government of Timor Leste to date. The story seem to be one of coming to meet the president and in course of that event he's shot extremely closed range. He and a college of his Leopoldino shot at extremely closed range in what appears to be an assassination," Jon Alleged.

In February this year Tempo Semanal witnesses a team of Australian Federal Police came to Tasi Tolu Dili to do the ballistic test related to those weapons were used in the President residence on February 11th 2008. "It would appear that the ballistics evidence support the conclusion that Alfredo Reinado and his college leopoldino were shots with two different weapons and the bullets used were not the same bullet that were used by Alfredo's man during the fire fights nor at the same bullets were used by the same man who were protecting the president. And so it appeared that there is a discrepancy in the analyses that the two men, Alfredo Reinado and Leopoldino were actually shot by man defending the President," Jon rule out.

In the other convey of two prison cars were taken the other 26 suspects from Becore Prison and one hand cup to the other while Gastao Salsinha hand cup alone but with a heavy guarded.

Out side the court yard in the other side of the main road some young people cried out Viva Major Alfredo and Viva Salsinha when the prison cars approach. The Alfredo followers were brought with them several banner written with black and red Ink demanding for Justice. Alfredo's Uncle Victor Alves also came to follow the court hearing. "I hope starting from this trial we will find the truth of who shot Reinado and why Reinado came to President Residence.'

The securities around the court were tied by the GNR Unpol and the Timorese PNTL officer. The UNPOL were a little bit over acting and worse then that those GNR officer told the Journalist that the journalist are not allowed to the room by the judges but when the International and national rule out in the court room some journalist have already in. The officer change the word by said, "There is no more space so we can't allow you in." The GNR and Timorese guards kicked out a Timorese journalist from the room while allowing the International journalist remain in their seat.

The tiny country President spent some times in Darwin hospital to recover from the gun wounds in his back. After the shot out there were many speculations related to the events up to now people are still confuse. There are many rumours still flying around Dili including who is the main actor on the day. Some says that Alfredo was invited to have a meeting with the President and some others said Afredo came to attacked the Timorese President. Even for several occasion President for poor people has clarified that he never invited Alfredo to have a meeting in his residence.
at Thursday, July 16, 2009