Shooting of Ramos-Horta: Marcelo Caetano Fingered in Court as Shooter. 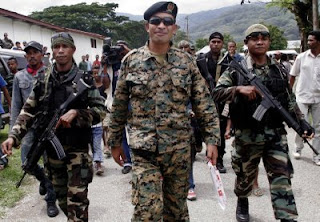 President Ramos Hortas acompany on his morning walk on 11/02/08.

He was promoted on September 25th 2008 to First Sargeant, because of his aid to the President.

The Da Silva was asked by the Judge to point out Caetano and with no voice but with confidence he did so. The court authority asked how does he know Caetano and Da Silva said they both are friend since they were in the army together. The court finished before 19.00 hours and at 18.35 Isaac left the court room in a realxed manner. Caetano was handcuffed with fellow acused Amaro "Susar" da Costa and were lead out the court, with big smiles waving to their familes.