Horta apologises for 1999 tragedy Timor Post 10 July 2009 President Jose Ramos Horta has apologised for the atrocities committed by Indonesian Armed Force and its militia men in 1999 after a UN ballot conducted to ensure the country's self-determination. 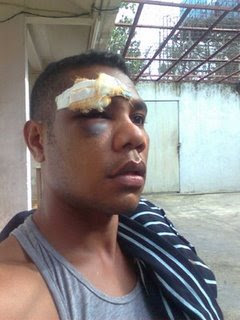 ETLJB Editor's Note: The Portuguese National Republican Guard (Guarda Nacional da Republica) in East Timor has been accused of human rights violations in the past during their deployment in East Timor. See also the Tempo Semanal report (only in Tetum) on a case of an alleged assault on an East Timorese national police officer (pictured on the left) by members of the GNR.

Fretilin thanks Carrascalao for his work Suara Timor Lorosae 10 July 2009 MP Francisco Miranda from Fretilin has thanked Deputy Prime Minister for Management and Public Administration Mario Viegas Carrascalao for his good will and his efforts in combating corruption in the country.
at Sunday, July 12, 2009