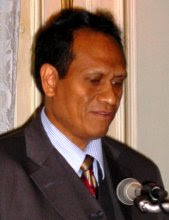 Statement By The Spokesperson of the IV Constitutional Government,

The Secretary of State for the Council of Ministers July 7, 2009

The Prime Minister, His Excellency Xanana Gusmao, will leave for Singapore this morning (July 7, 2009) to receive specialist medical treatment for a chronic back injury he has suffered since the time of the guerrilla struggle.

The same injury was exacerbated recently after a long car trip on a Government working visit to the enclave district of Oe-Cusse Ambeno.