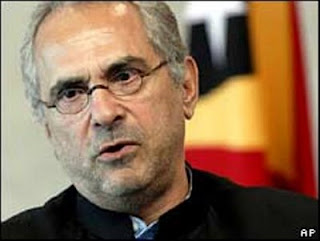 The US Vice President, Joseph R. Biden, Jr, has written to President Jose Ramos-Horta a letter dated June 22 2009 where he stated “As the newest democracy in Asia, Timor-Leste is a testament to what can be achieved when the people are afforded the right to self-determination.

And though you write of the challenges that lie ahead for Timor-Leste, the United States will work with you to confront those challenges head-on where we can”. “We want to see you succeed, and we will remain a good friend to and strong supporter of the people of Timor-Leste,” vice President Biden stated.

President Jose Ramos-Horta said that Vice President Joseph R, Biden Jr is very good friend and supporter of Timor-Leste for many years, when he was a member of US Senate and of the Senate Foreign Committee.

“In the past, during our struggle, Vice President Biden like senators Edward Kenedy and Tom Hurkins where among the many in the US Congress who always supported us, and I know that Timor-Leste can count on the continue friendship from the United States,” President Ramos-Horta said. END
at Friday, July 10, 2009