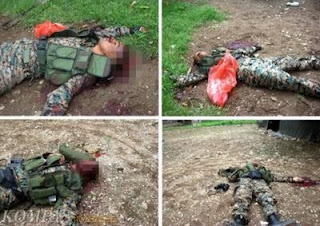 Prosecutor objects to international legal advisers for Ms. Pires Radio Televisaun Timor Leste 14 July 2009 The Timorese Prosecutors in the trials of the accused in the alleged attempted assassination of President Horta on 11 February 2008 has argued against the presence of the two foreign legal advisors for Ms. Angelita Maria Pires in the trial. But the court overruled the prosecution's objections.

I will tell what I know in the court: Pires Timor Newsline 14 July 2009 The slain rebel leader Alfredo Reinado Alves’ lover, Angelita Maria Pires, said that during her trial she would reveal what she knew about the attacks on President Horta's residence on February 11 last year.

Image: Major Alfredo Alves Reinado lies dead in the presidential compound of East Timor President Jose Ramos Horta on 11 February 2008. According to forensic reports, he was shot at close range. The weapon has not been discovered during the judicial process.
at Wednesday, July 15, 2009