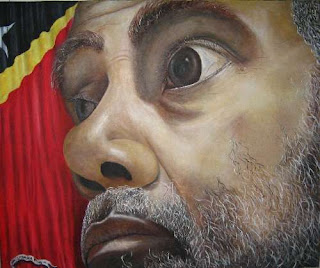 East Timor's Ombudsman is calling for the country's Minister of Justice to be prosecuted, over allegations of corruption, following calls from the country's opposition for Prime Minister Xanana Gusmao to resign, following revelations he authorised a multi-million dollar rice-importation contract to a company linked to his daughter.

The Ombudsman says his office has launched an investigation into the Ministry of Commerce and Industry over that - and a number of other deals - authorised by Mr Gusmao.

XIMENES: The corruption in Timor-Leste, we can say that maybe the problem is the control of our Ministers against civil servants, or maybe the control from the top leader, to the minister, so that is the problem we face in Timor Leste.

MARCH: Late last year, allegations surfaced that East Timor's Justice Minister Lucia Lobato had colluded with a friend in order for that friend to secure a $US1 million contract to rebuild a wall at the Becora prison in the capital DIli.

At the time Ms Lobato said she welcomed an investigation by the ombudsman into the allegations.

She said she was prepared to face justice - without using her ministerial immunities - if it found she was involved in any wrongdoing.

The ombudsman, Sebastiao Ximenes, has now passed on his findings to the office of the Prosecutor General.

MARCH: So have you recommended to the Prosecutor General to prosecute the Justice Minister or just investigate further?

GRAB: Yes, investigate further, and also to prosecute. Not only Minister of Justice, we also found some companies involved in this project

MARCH: So both the minister and the companies?

The Minister of Justice has not responded to requests by Radio Australia to comment.

The recommendation follows recent revelations East Timor's Prime Minister Xanana Gusmao signed off on a $US3.5 million contract to a company part owned by his daughter, Zenilda Gusmao.

The company - Prima Food - was one of 17 companies awarded government contracts to import rice into East Timor.

Several of the companies are part owned by the wife of another government minister.

The opposition has called for Mr Gusmao to step down.

Mr Ximenes says his office has now launched an investigation into the the circumstances surrounding the Prime Minister and Commerce Minister's approval of the contracts.

XIMENES: I receive a letter from Mr Ramos-Horta, the President of the Republic, to request to our office to conduct investigation against Minister of Commerce and tourist, that is why I mention we already start.

Dr Horta has defended the Prime Minister's role in authorising the contract to the company linked to his daughter.

HORTA: I think corruption is serious in Timor Leste but I reject the charges that top government officials are involved like the prime minister. Tthe prime minister is a very very honest person, he wants to do things fast.

MARCH: Sebastiao Ximenes say he hopes the investigation into the issuing of rice-import contracts will be complete in two months.

But he says that depends heavily on cooperation of the government officials and companies involved.

XIMENES: When our office invite them to come the office, sometimes they have some excuse not to come... So that's a problem that we face.

MARCH: Even if the investigation is completed in the expected time frame and passed on to the prosecutor general, Mr Ximenes says East Timor's legal system already has a backlog of corruption cases.

XIMENES: The Prosecutor General already received from our office 28 case for corruption, but not one case they forward to the court... but I believe the problem they face is manpower - no prosecutors.

MARCH: East Timor's parliament recently passed legislation to set-up an anti-corruption commission that would take on the role of the Ombudsman in dealing corruption allegations.

The commission has not yet been properly established.
-----
Image added by ETLJB - East Timor's Prime Minister Kay Rala Xanana Gusmao, Leader of the armed liberation of East Timor and national hero. His government is embroiled in corruption, cronyism and nepotism allegations. Portrait by Arte Moris artist 2006
at Friday, July 24, 2009