East Timor boy to go back home with a supple spine 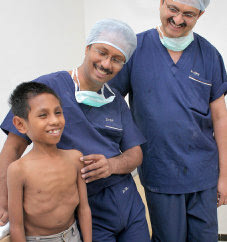 He underwent surgery under Project Swasam COIMBATORE: Alberto Paiva Matos Freitas cannot certainly understand the meaning of the Tamil word ‘swasam’; the 16-year-old boy from East Timor does not even know English.

But, in a couple of days, he will take back home the spirit of Project Swasam, a community outreach programme of Ganga Hospital to cure poor people of spinal problems caused by tuberculosis.

Surgeries, however tough and expensive, are done free of cost under this project.

The dimuntive boy was referred to the hospital here by the Australasian College of Surgeons as part of their outreach programme.

The Children First Foundation requested Director and Head of the Department of Orthopaedics and Spine Surgery at Ganga Hospital S. Rajasekaran to take up this case under Project Swasam.

Dr. Rajasekaran, who had done a research in spinal tuberculosis, told The Hindu on Friday that the boy landed here because the college remembered a presentation made by the surgeon in 2007 at the Asia-Pacific Orthopaedic Association’s triennial conference at Seoul in South Korea. The presentation had won the award at the meet for the most innovative procedure.

Tuberculosis had led to the crumbling of some of the spinal bones as it had eaten into these. The boy was cured of tuberculosis, but it had done its damage to the spine. Dr. Rajasekaran said the spine had bent outward at an angle of 116 degree and this problem was known as “Buckling Collapse of Spine in Childhood Tuberculosis”.

The boy was turning breathless as the thoracic cage was getting congested because of the acute bend in the spine.

Earlier, the treatment was multi-stage. Now, the Opening-Closing Wedge Osteotomy was a single procedure that involved accessing the affected portion from the front and back of the spine.

Till a couple of months ago, the spine could be straightened only up to 60 degrees, because of the fear of injuring the spinal chord by overstretching it.

But, latest technology helped in straightening it to 40 degrees because the patient/ spinal chord response could be monitored during surgery itself.

“Alberto is going home on Sunday as he is doing fine. His spine has been straightened to 40 degrees,” said Dr. Rajasekaran, accepting a traditional shawl from the patient as a token of gratitude.