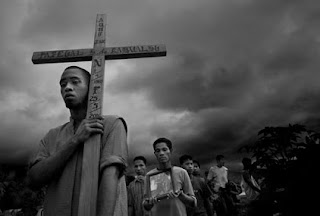 ETLJB 30 August 2009 SYDNEY - 10 years ago on this day the people of East Timor faced a turning point in their history - the 30 August "jajak pendapat" (referendum) which ended a 24-year-long genocide and ushered in the era of Timorese independence.

The horrifying backlash from the Indonesian military and its Timorese militia proxies left 1500 dead, hundreds of thousands forcibly relocated and the entire nation destroyed - the sacrifices made for freedom and liberty - was the culmination of the long years of struggle for self determination in which hundreds of thousands of East Timorese were killed or died.


Constitution of the Democratic Republic of East Timor

Following the liberation of the Timorese People from colonisation and illegal occupation of the Maubere Motherland by foreign powers, the independence of East Timor, proclaimed on the 28th of November 1975 by Frente Revolucionaria do Timor-Leste Independente (FRETILIN), is recognised internationally on the 20th of May 2002.

The preparation and adoption of the Constitution of the Democratic Republic of East Timor is the culmination of the secular resistance of the Timorese People intensified following the invasion of the 7th of December 1975.

The Resistance was divided into three fronts.

The armed front was carried out by the glorious Forcas Armadas de Libertacao Nacional de Timor-Leste (FALINTIL) whose historical undertaking is to be praised.

The action of the clandestine front, astutely unleashed in hostile territory, involved the sacrifice of thousands of lives of women and men, especially the youth, who fought with abnegation for freedom and independence.

The diplomatic front, harmoniously carried out all over the world, enabled the paving of the way for definitive liberation.

In its cultural and humane perspective, the Catholic Church in East Timor has always been able to take on the suffering of all the People with dignity, placing itself on their side in the defence of their most fundamental rights.

Ultimately, the present Constitution represents a heart-felt tribute to all martyrs of the Motherland.

Thus, the Members of the Constituent Assembly, in their capacity as legitimate representatives of the People elected on the 30th of August 2001,

Based further on the results of the referendum of the 30th of August 1999 organised under the auspices of the United Nations which confirmed the self-determined will for independence;

Fully conscious of the need to build a democratic and institutional culture proper of a State based on the rule of law where respect for the Constitution, for the laws and for democratically elected institutions constitute its unquestionable foundation;

Interpreting the profound sentiments, the aspirations and the faith in God of the People of East Timor;

Solemnly reaffirm their determination to fight all forms of tyranny, oppression, social, cultural or religious domination and segregation, to defend national independence, to respect and guarantee human rights and the fundamental rights of the citizen, to ensure the principle of the separation of powers in the organisation of the State, and to establish the essential rules of multi-party democracy, with a view to building a just and prosperous nation and developing a society of solidarity and fraternity.

The Constituent Assembly, meeting in plenary session on the 22nd of March 2002, approves and decrees the following Constitution of the Democratic Republic of East Timor
at Sunday, August 30, 2009