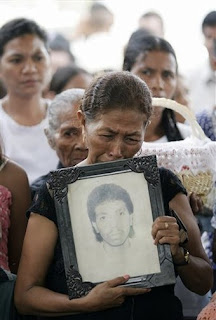 Up to 200,000 people in the tiny half-island were killed either directly by Indonesian troops or as a result of the occupation, and the Indonesian military employed a scorched earth policy which devastated the country in the wake of the vote.

On August 30, 1999, almost 80 per cent of East Timor's population went to the polls to vote for independence. That year, more than 250,000 East Timorese fled East Timor or were expelled by troops, police and paramilitary militia.

Julio Barreto, 36, was one of those who fled across the border to escape the marauding militias, but it wasn't the first time he had found himself running for his life from Indonesian violence.

He was also at Dili's Santa Cruz Cemetery on November 12, 1991, when Indonesian troops opened fire on a peaceful protest during a memorial service for pro-independence activist Sebastiao Gomes, killing more than 270 people.

"We had climbed up on the wall of the cemetery. When the troops started to shoot at us, I jumped off the wall. My hands were bleeding because so many people were jumping, trying to escape," he said.

"I saw one guy who had been working as a journalist get shot. As soon as I saw him getting shot, I ran."

Now a free man in his own country, Barreto wants closure.

"We haven't heard the names of those who were shooting at us, but I want justice," he said.

No senior officials were charged with the massacre at Santa Cruz and only one of 18 junior government officials indicted received a jail term.

The UN-established Serious Crimes Unit has indicted 391 people for alleged war crimes and crimes against humanity in East Timor, resulting in 84 convictions and three acquittals.

Most of those yet to be arrested are given sanctuary by Indonesia, including former military chief Wiranto, who ran for the vice-presidency in July elections, and former militia leader Eurico Guterres.

In 2006, he was sentenced to 10 years in prison for human rights violations. The conviction was overturned by the Indonesian Supreme Court in April last year and he was released to pursue a political career in West Timor.

A reconciliation commission established jointly by East Timor and Indonesia found last year that while gross human rights were committed by Indonesian forces, there should be no more trials and no further arrests.

East Timorese President Jose Ramos-Horta, a Nobel Peace laureate who devoted his life to ending the Indonesian occuption, has been outspoken in his support of amnesty as a prerequisite for normalising ties with Indonesia.

In a recent interview, he told Foreign Policy magazine: "Let bygones be bygones. Let us not forget the victims and heroes, but let us forgive those who did harm."

Those who remain unpunished shouldn't sleep easy just yet though.

Militia leader Martinus Bere was apprehended in East Timor on August 8, more than five years after he was indicted for his role in the Suai church massacre of September 6, 1999, when up to 200 people were killed.

There could be more arrests like this in the future, says Louis Gentile, representative of the UN High Commissioner for Human Rights.

"There is an increasing recognition (around the world) of the principle of universal jurisdiction, which means that someone who has committed crimes of that gravity could be prosecuted in any jurisdiction that recognises this principle," he said.

National Unity Party leader Fernanda Borges is one of the main advocates of the establishment of an international tribunal to try those indicted for war crimes and crimes against humanity.

"Victims see that perpetrators have not been held responsible for their crimes and this makes them lose confidence in the state and its legal system," she said in a recent speech.
at Sunday, August 23, 2009