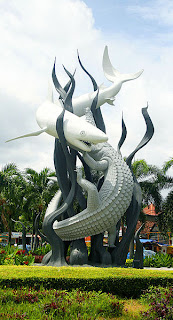 After meeting East Java Governor Soekarwo on Friday, Timor Leste delegation chairman Fransisco Jerenomi said there were 2,000 students from Timor Leste studying in universities in the province, especially in Malang and Surabaya.

"We asked the governor to take care of the health and education of our citizens."

Soekarwo said Timor Leste hoped to establish an education and health cooperation with the provincial administration.

"But we are still waiting for a memorandum of understanding between Timor Leste, Indonesian Ministry of Foreign Affairs, the Health Ministry and the Education Ministry."

He hoped Timor Leste students would not stay in a special dormitory, saying they could rent rooms similar to other students.

"They are safe here. We hope more Timor Leste students will study here. There are many quality universities here," he said. - JP
-----
Image added by ETLJB: The Surabaya (Shark and Crocodile) Symbol of Indonesia's second city of more than 3 million people. The crocodile is the central figure in East Timor creation mythology.
at Saturday, August 08, 2009