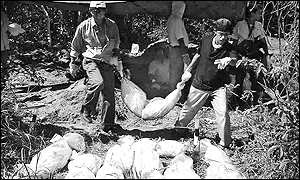 The Jakarta Post August 12, 2009 by Yemris Fointuna Kupang The Belu Regency has demanded the Indonesian government register an official protest with the government of Timor Leste after former anti-independence militant Maternus Bele was arrested by the Timor Leste police.

The former Laksaur commander, who is now secretary of Kobalima Timur district, was detained after he visited his sick relative and prayed at the Saui Church.

Local authorities suspect Maternus of involvement in a murder at the Suai Church after riots in 1999.

"Regardless of his past background as a militant, Maternus is now an Indonesian citizen and holds a position in the regency," Joachim said.

He added that the arrest would exacerbate the reconciliation process between East Timor residents living in refugee camps and pro liberty supporters staying in Timor Leste.
-----
Image added by ETLJB: The recovery of the remains of victims of the 1999 Suai church massacre. Suai was the scene of one of the most horrifying massacres in 1999 when Indonesian troops and their militia proxies ran amok, leaving the country in ruins - and its people in an ocean of grief. The international community is yet to hold to account the Indonesians who were responsbile for these crimes against humanity.