Peacekeeping troops prepare to pull out of East Timor 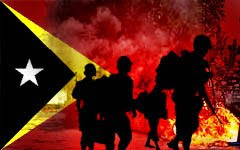 ABC Radio Australia Peacekeeping troops prepare to pull out of East Timor Updated August 28, 2009 11:59:20 - The United Nations is preparing for a gradual withdrawal from East Timor early next year and expects Australia will begin to reduce its troop numbers at the same time.

But all those involved are keenly aware about the need for East Timor to be properly prepared, after Dili descended into violence in 2006 and the 2008 shooting of President Jose Ramos Horta by rebel elements of the army.

SARA EVERINGHAM: It's one way to celebrate the 10 year anniversary of East Timor's referendum: a shooting competition between the Australian soldiers and East Timor's military and police. The Australians say it's a positive sign.

DAVE SMITH: Competition of this nature is good because it's healthy, it promotes interaction in the process of enabling these two security elements to become, to move forward as professional forces.

SARA EVERINGHAM: Three years ago East Timor's army and police were fighting each other on the streets of Dili during the crisis of 2006 when a mutiny split East Timor's army. Colonel Smith says much has changed since then.

DAVE SMITH: The security situation here is steadily improving, and you can see that with the way that our soldiers are now patrolling on the streets. Our patrols are lower profile and when our soldiers patrol they patrol with their weapons slung with the muzzles pointed down.

SARA EVERINGHAM: There are about 650 Australian soldiers in East Timor. They help provide security for the more than 1,000 United Nations Police here.

The UN has started handing over responsibility for policing to the East Timorese. Longuinhos Monteiro is East Timor's commissioner of police.

LONGUINHOS MONTEIRO: This job has a big challenge of how to reunify the mentality of our people.

LONGUINHOS MONTEIRO: Some policemen off duty went to bar, their gun with them. We have some with uniform get drunk, we punished them. I know that some of them is still try to learn and try to understand why I have to do this, including one of my best friend. Yesterday I have to kick him out from my unit. Particularly I consider this very serious.

SARA EVERINGHAM: The head of the United Nations in East Timor, Atul Khare thinks the UN can soon begin drawing down its presence in East Timor.

ATUL KHARE: It should commence around March or April 2010 and then in a gradual phased manner could take up to the middle of 2012 when the successful conclusion of the next national elections would give us even more hope for the future.

The commander of the Australian and New Zealand soldiers in East Timor, Brigadier Bill Sowry says lessons have been learned.

BILL SOWRY: Our draw down will be determined after we have some discussions between our Government, with the UN and with the Government of Timor-Leste. You know, what we can be very sure of is that we will not do what happened prior to 2006 is make large reductions that enable other events to occur and create a vacuum.

-----
Image added by ETLJB: Can the civil peace prevail in East Timor without the international peacekeepers?
at Saturday, August 29, 2009