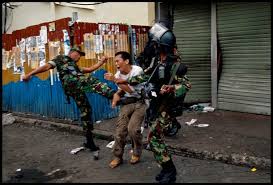 As much as 80 per cent of the country's (known as Bumi Lorosae) needs is supplied from Indonesia.

These needs range from education, health, to infrastructure development.

This was conveyed by the Indonesian Ambassador to Timor Leste, Sahat Sitorus.

Sahat explained, Indonesia plays more role than other countries, because of historical factor. For decades, East Timor had become one of the provinces in Indonesia. The closeness of the relationship is still intertwined to date.

"80 percent of the needs of Indonesia. Yes, we are now a lot of entering. This is because of the historical relationship. We are with Timor Leste blood relations, but separated by history, "said Sahat, told reporters on Tuesday (19/09/2017).

For example on the educational side, he said, every year as many as 9000 students from Timor Leste choose to study undergraduate degree in Indonesia. A number of areas of destination, such as Bali, Malang, Semarang, Yogyakarta, Bandung, and Jakarta.

Prior to taking further education in Indonesia, he said, the government in cooperation with the Embassy of the Republic of Indonesia in Timor Leste conducted Indonesian language learning. This is done to expedite the language, because everyday people use the Tetun language.

Cultural similarities and lifestyles are the reason why Indonesia is the destination for education. Although in terms of history, Timor Leste is closer to Portugal. "They are more comfortable studying in Indonesia," said Sahat.

For health, sometimes Timorese people choose treatment to the island of Bali. This is because medical personnel and health facilities are considered better than in their own country. As for infrastructure development, a number of Indonesian State-Owned Enterprises (BUMN) have entered the country.