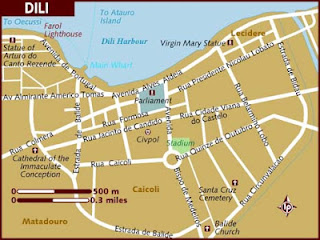 The situation in East Timor is "completely quiet", with no reports of incidents or problems anywhere in the country since the opposition passed a motion to reject the government program, police said.

"Everything is totally quiet and we have no reports of any problems in the territory," Julio Hornay, the PNTL commander of the National Police of Timor-Leste, told Lusa.


After the vote, and in the face of some moments of tension that have taken place in the plenary and within the parliament complex - without any serious incidents to be registered - Timor-Leste's Defense and Security Minister said that he would reinforce preventive security measures .

"It is a normal situation," said Jose Somotxo, adding that instructions had been given to the police and the military.

Timorese political leaders, including the prime minister, have called for the population to remain calm.

The motion was approved with the support of the National Congress of East Timorese Reconstruction (CNRT) and the Popular Liberation Party (PLP) - led respectively by former Timorese presidents and historic leaders Xanana Gusmão and Taur Matan Ruak - and the deputies of Kmanek Haburas Timor Oan National Unit (KHUNTO), which debuts in parliament in the current legislature.