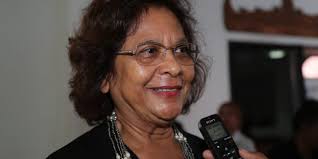 Ângela is the daughter of Manuel Viegas Carrascalão, a Portuguese exile who married a Timorese. 13 children emerged from the marriage, several of which occupied high political positions.

Carrascalão visited the Liceu Dr. Francisco Machado . From 1978 to 1981, she has worked for the Portuguese news agencies Notícias de Portugal , the Association of Noticiosa (ANOP) and Lusa, as well as for the television channel Sociedade Independente de Comunicação (SIC) and the magazine Jornal Expresso . Then she switched to the Portuguese newspaper Público until 2002 .

In East Timor, Carrascalão was director of the newspaper Lia Foun in 2005 . In 2006/2007 she worked as a documentary and interpreter for the Reception, Truth and Reconciliation Commission of East Timor (CAVR) and from 2006 to 2008 as correspondent for the Australian Radio SBS .

In 2007, Carrascalão ran for the UDT on the 9th place in the parliamentary elections . The party succeeded but not a seat to win.  From 2008 to 2009, she was the head of the Cabinet of the Secretary of State for Defense of the IV Government of East Timor.

From 2005 to 2010, Carrascalão Jura studied at the Universidade Nasionál Timór Lorosa'e (UNTL) and graduated with a doctor's degree. Since January 2011, she has been a lecturer and later also Dean of the Faculty of Law at the UNTL. In 2013, she was also appointed member of the Conselho de Opinião of Radio-Televisão Timor Leste for four years .

On October 13, 2017 was Ângela Carrascalão of President Francisco Guterres to the Minister of Justice of the VII. Government appointed and sworn in on 17 October.

Complete List of Deputies of the National Parliament of East Timor
at Monday, October 23, 2017