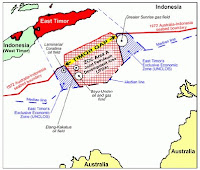 Should the venture partners decide to develop the Timor Sea gas field as a floating project, the ship could be located in an area jointly administered by the two countries, rather than Australian waters, Don Voelte, chief executive officer of Perth-based Woodside, said today. Sunrise could then avoid Australia's carbon constraints and pay lower royalties, he said.

Australia's proposed carbon trading system, to start up in 2010, doesn't award any free emission allowances to LNG producers under its current design. That increases their costs in comparison with rivals in countries with no charge on carbon. The Sunrise partners, which include Royal Dutch Shell Plc and ConocoPhillips, are due to decide in the first half of next year whether to use a floating plant or process the gas in Darwin, northern Australia.

Sunrise 'may be the first project that Australia loses,' Voelte told investors at a briefing in Sydney. 'That's not a threat, it's a comment' on the emissions trading plan, he said.

The field, which holds about 5.4 trillion cubic feet of gas, overlaps a boundary between Australian waters and an area jointly managed by Australia and East Timor.

East Timor and Australia in February last year completed a treaty for the administration of the Sunrise field, under which they agreed to split royalties from the upstream part of the project equally. Royalties levied on the downstream, gas processing part of the project would depend on where the LNG production facility was located.

In Australia, the downstream royalties would be about 40 percent, compared with 10 percent in East Timor, Voelte said today. Building a floating LNG plant, using Shell's technology, would limit the capacity to about 3.5 million metric tons a year, he said. An onshore plant built in Darwin next to ConocoPhillips' existing LNG plant would have a capacity of 4.8 million tons a year, he said.

The partners may approve the project for development by the end of 2010, Woodside said. The venture earlier this year ruled out a development option favored by East Timor of building an onshore plant in East Timor after finding that plan was riskier and more expensive than its two preferred options.

Woodside has about 33 percent of Sunrise and is the operator, while Houston-based ConocoPhillips owns 30 percent, Woodside's 34 percent-shareholder Shell owns 27 percent and Osaka Gas Co. 10 percent.

LNG is natural gas that has been chilled to liquid form, reducing it to one-six-hundredth of its original volume at minus 161 degrees Celsius (minus 259 Fahrenheit), for transportation by ship to destinations not connected by pipeline. On arrival, it's turned back into gas for distribution to power plants, factories and households.

To contact the reporter on this story: Angela Macdonald-Smith in Sydney at amacdonaldsm@bloomberg.net