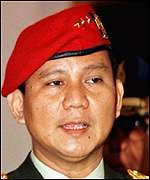 During the meeting, Lere, a former commander of the Fretilin guerrilla army, was accompanied by Timor Leste's deputy defense minister, Julio Thomas Pinto.

"A meeting like this is very important. In the past we went head to head as enemies. We fought each other. But now, we are together to bury all the hatred and replace it with a friendship bond," Prabowo said, as quoted by kompas.com.

During the meeting, Prabowo proposed the return of bodies of deceased Indonesian military officers to make it easier for families and relatives to pay their respects.

Lere, meanwhile, requested improved access for the Timor Lestegovernment to files regarding Indonesia's military operations in Timor Leste during the New Order period, as part of an effort to write objective historical accounts of the war between the two nations.

Lere said the Timor Leste government had made formal proposals of the request to the Indonesian government.

Indonesia and Timor Leste were both facing the challenge to answer demands of victims of the war, particularly for their compensation and matters regarding their livelihood, Lere said. He also called on Prabowo to visit Timor Leste soon.

Image: General Prabowo is a war criminal. Amongst other things, in December 1978, he commanded an Indonesian military unit called Nanggala 28 which was responsible for killing the Fretilin commander Nicolau Lobato. See East Timor 1999 Crimes against Humanity by Geoffrey Robinson University of California Los Angeles July 2003. Prabowo was also named as being a key figure in connection with the Kraras Massacre in Viqueque district in 1983. ( CAVR Update April – May 2003)
at Friday, November 21, 2008