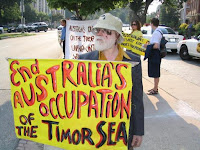 Offshore Oil and Gas News 11/25/2008 5:11:06 AM GMT- DARWIN, AUSTRALIA: A survey conducted on the Timor Sea is said to provide evidence to back East Timor's demand that Woodside locate the liquefied natural gas (LNG) plant for the Greater Sunrise oil and gas field onshore East Timor, according to a report on The Age newspaper.

Woodside previously ruled out building a pipeline to transport the oil and gas from Sunrise to East Timor partly because of a 3,400-metre (11,154-ft) deep trench in the ocean floor known as the Timor Trough.

However, Houston-based DeepGulf, the company behind the survey said the data collected showed the walls of the Timor Trough are "soft and sloppy" and the construction and installation of a subsea pipeline to onshore East Timor "looks feasible".

DeepGulf has had three survey boats operating in the waters off East Timor since June. The survey is expected to be complete by January and a report on the results will be drawn up. DeepGulf was commissioned to do the survey for the East Timorese Government and a consortium of South Korean companies.

East Timor's leaders have recently hardened their rhetoric over their demand for the plant on its shores, even threatening to block the project rather than yield to Woodside's terms. The country's president, Jose Ramos Horta, told the Australian's Northern Territory (NT) Parliament this month that he "would prefer to forgo Greater Sunrise than surrender to the dictates of a bunch of oil executive millionaires."

Woodside this year declared it was considering only two options for Greater Sunrise, which contains about 300 million barrels of light oil and 8.3 Tcf of natural gas: piping and processing the gas in Darwin where ConocoPhillips, one of Woodside's partners in the venture already, has a processing plant; or building a floating plant in the Timor Sea.

Tensions over the field rose when East Timor recently signed a memorandum of understanding that gives South Korea preferential access to the gas, the first time East Timor has made a gas supply contract with a foreign country since it became independent in 2002.

Under the Greater Sunrise agreements Woodside and its partners retain the right to market the gas. East Timor will also receive 50 per cent of the government upstream revenues generated from Greater Sunrise.

Horta told the NT Parliament that his country would soon appoint a senior negotiator for Sunrise. "We are ready to study and analyse all options, to talk and explore ideas and arrangements that are mutually beneficial," he said.

However, he also signaled that East Timor was ready to continue to resist Woodside. "My people are poor and have been victimised for too long," Horta stated. "You are rich and powerful. So I have to side with my country and people who are weaker and poorer."