The inaugural “Sergio Vieira de Mello Human Rights Awards 2008” is a national event in Timor-Leste whose objective is to recognise the outstanding human rights contribution of individuals, groups or State institutions in Timor-Leste to the nation.

Although Timor-Leste’s socio-political history is coloured with both documented and anecdotal human rights violations, spanning decades, the 2002 reinstatement of its independence saw the placement of human rights as a cornerstone of Timor-Leste’s young democracy.

Notions of peace, security, stability and social cohesion are ideals that Timor-Leste espouses. To make these ideals a reality, individuals, civil society, State institutions and the international community have worked together, and severally, toward the achievement of these ideals. Positive changes are slowly taking place and will continue to take place.

The “Sergio Vieira de Mello Human Rights Awards 2008” contributes to this process of “positive changes” in Timor-Leste by:

1. publicly recognising the outstanding contribution of Timorese persons and/or groups to the field of human rights;

2. highlighting progress made in Timor-Leste in the area of human rights; and

3. encouraging the work of Timorese human rights defenders, activists, promoters, advocates, and service providers for their tireless efforts in promoting human rights for all.

Objectives of the Awards

The objective of the national human rights awards is to contribute to the development and consolidation of peace, security, stability and social cohesion, and to encourage respect for, and the protection and promotion of, all human rights and fundamental freedoms prescribed in the Timor-Leste Constitution and in all the international treaties that Timor-Leste is a party to.

Funding for the Awards and its Administration

As the awards are an initiative to garner nation-wide support and rallying-together on the value of human rights to the development, peace, security and stability of Timor-Leste, the “Sergio Vieira de Mello Human Rights Awards” initiative will be administered and funded by the Office of the President of the Democratic Republic of Timor-Leste as of 2009. UNMIT is funding the 2008 inaugural event.

Number of Prizes to be Awarded

One prize is to be awarded for outstanding contribution in the promotion of respect for, and protection of, civil and political rights.

The other to be awarded for outstanding contribution in the promotion of respect for, and protection of, economic, social and cultural rights.

Nominations for the Awards

For the 2008 inaugural awards, nominations are now open. Nomination Forms can be collected at the Office of the President of the Democratic Republic of Timor-Leste, or downloaded from the UNMIT website (www.unmit.org).

A nomination form is to be filled-in and sent to the Office of the President of the Democratic Republic of Timor-Leste, or by email to assessoriageralpr.rdtl@gmail.com by 27 November 2008.

Address of the Nominee (including telephone number, fax number, and email address)

Please indicate below (with an “X”) which award category the nominee is being nominated for:

Please WRITE here information on the contribution of the nominee to the cause of human rights in Timor-Leste, which has prompted your nomination for the category indicated. 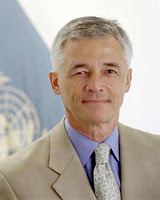