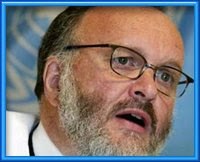 As if East Timor needs more problems, the controversial former regional administrator of Mitrovica in Kosovo (UNMIK), Gerard Gallucci, has been assigned to the United Nations Mission in East Timor. But then, with the East Timor's recent history of clemency for infamous murderers, he might just fit in quite well! Beware this man, Timor-Leste!

Gallucci leaving Mitrovica 20 October 2008 - Mitrovica Mayor Bajram Rexhepi has welcomed the decision of the controversial American UNMIK administrator from Mitrovica Gerard Gallucci to leave Kosovo, saying it is good news but has taken too long.

“We hope that after his departure, other UNMIK officials will be more responsible in the establishment of law and order in Mitrovica,” said Rexhepi today during the regular Committee for Security of the Mitrovica Municipality.

Rexhepi said that the regional UNMIK administrator was a devotee of status quo and an obstacle for stabilization of the situation in the north.

“He prevented projects of reconstruction and the return of the displaced from the north and reported to the representatives of the Serb parallel structures on everything.”

According to Rexhepi, the stance of Gallucci on the March events when Serb mobs attacked the court in Mitrovica killing a UN police officer and wounding many police officers and KFOR soldiers was an amnesty for those that committed these acts of violence.

Rexhepi stated: “UNMIK officials should help in the establishment of order in this part of the country and stop cooperation with Serb parallel structures which are illegal.”

Rexhepi called the situation in the municipality quiet and improving.

Gerard Gallucci confirmed last week that he has been reassigned to a new position at the UN mission in East Timor. His UNMIK superiors requested Gallucci’s resignation over the court issue, but they were turned down by New York.
-----
For a report on the incident in Mitrovica, see UN forces face grenade and gun attacks from Serbs in Mitrovica 18 March 2008
at Tuesday, November 25, 2008