The Regulation of Livestock in Urban Areas in East Timor 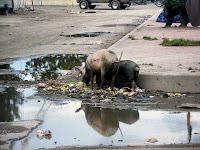 East Timor Law Journal 24/11/2008 - Pigs represent a significant health risk in East Timor because they carry potentially deadly diseases such as Japanese Encephalitis that is transmitted from pigs to humans by mosquitoes that have bitten the infected pigs. Pigs and other wandering livestock also pose a risk for traffic accidents.

In October 2008, Operasi Babi (Pig Operation) was implemented in the capital city of East Timor, Dili. In this operation, squads of livestock collectors went systematically around the suburbs of Dili in trucks seizing wandering pigs with the intention of slaughtering them and distributing the pork to, amongst others, prisoners. This was done without the payment of compensation to the pigs' owners.

There should be a proper legislative basis for the eradication of the social problem of pigs and other livestock wandering freely around the streets of urban areas in East Timor.

The University of San Francisco School of Law Legislative Drafting Initiative which was implemented in East Timor in 2003 - 2004 produced a series reports on the analyses of social problems by civil society groups using the legislative drafting for democratic social transformation methodolgy - the ROCCIPI methodology. These reports included an analysis of the social problem of livestock in urban centres in East Timor including draft legislation directed at resolving this social problem.

This report, and the Indonesian and Portuguese language versions, have now been published on the East Timor Law Journal and may be freely accessed by following the following links:


The index of the analyses of other social problems in East Timor using the ROCCIPI methodolgy published to date in the East Timor Law Journal is here.

East Timor Law Journal - Towards the rule of law in Timor-Leste.