Oxfam and Timor Government - War of Words over Poverty 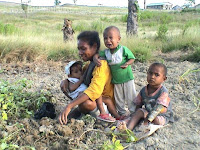 When international aid agency Oxfam Australia released its latest report highlighting food shortages in the Asia Pacific region and in particular East Timor, it wasn’t counting on a war of words with the Timor-Leste Government.

As part of World Food Day, Oxfam released a report showing that people in parts of East Timor are now facing up to five months a year without enough food to eat.

Oxfam Australia Executive Director Andrew Hewett said at the launch that much of the region was being hit hard by the food crisis in both urban and rural areas due to increasingly erratic weather, increased biofuels production and growing consumer demand in China, India and advanced Southern countries.

Key findings of the survey, which was conducted in the districts of Manatuto, Liquica, Manufahi, Bobonaro, Oecusse, Covalima and Lautem, included:

1. Diets lack protein and throughout the survey area the number of children under 5 suffering from chronic malnutrition ranged from 50 per cent to 59 per cent.
2. More than 70 per cent of households surveyed were "food insecure" - that is, not confident they would find enough to eat each day; in some areas as high as 90 per cent.
3. An urgent need to invest in small scale farmers to support variety and quantity of crops.

Hewett said East Timor was just one of the countries being hit hard by the global food crisis throughout the region.

However a week later, a spokesman for the Timor-Leste Government, Secretary of State for the Council of Ministers, Agio Pereira, said that international aid agencies like Oxfam need to be more responsible when using nations like Timor-Leste as case studies to promote their own organisational agendas.

He said during Oxfam’s recent campaign for World Food Day, their portrayal of the food security situation was considered inaccurate.

Pereira said that in the last five years, the Timorese have been the source of over 1200 studies and an equal amount of surveys from a wide variety of international aid agencies like Oxfam.

He said they are all conflicting in methodology, data, findings and recommendations. We are calling for a more coordinated effort across agencies in delivering a sound and accurate assessment of the progress made in Timor-Leste.

Periera went as far as to say that it is becoming more evident that organisations like Oxfam believe good news stories do not equate to robust donations.

He said when you have dozens of aid agencies competing for donor funding, small developing nations like Timor-Leste become part of the ongoing pitch rather than a vital part of the dialogue to demonstrate how concrete donor funding in coordination with a pro-active Government investing heavily in food security can produce significant results.

In his counter claim, Pereira stated the IV Constitutional Government of Timor-Leste has taken significant measures to ensure food security focusing on integrated campaign in ensuring citizens have access to food, not to mention the other international aid agencies in Timor-Leste working for the common goals.

Currently, Timor-Leste has 16 international agencies from 24 donor partners working under a coordinated effort between the Government, the World Bank and UNMIT.

Periera concluded by saying while these organisations do tremendous work, they have become highly corporatised in their pursuits to contribute to the development of small, post-conflict nationals like Timor-Leste.

Oxfam’s Andrew Hewett says he stands by the report which is based on an in-depth survey of conditions in Timor-Leste.

Hewett says Oxfam will continue to work with the people of Timor-Leste and with the Government as it has since 1999 to improve food security in that country.