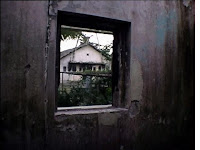 Suai Media Space 20 November 2008 - The Circle of Stones the short film (11mins) has been uploaded on to Suai Media Space. Written and Directed by Jen Hughes and Filomena dos Reis. Edited by Rosie Jones

The Circle of Stones documents the story the Suai Church Massacre . The film intercuts a re-enactment of the massacre, written and directed by Filomena dos Reis for a performance held on the First Anniversary, with the grieving around the circle of stones and the Catholic Mass. In this way the film has been given an intimate and emotional dramatic tension rarely seen in a short documentary. Controversial because of its intimate shots of the women grieving and its emotional character, the critics couldn’t know that the footage was made possible by the deliberate actions of those women who pulled the filmmaker into the circle so that their story would be told to the world. As Melbourne writer and critic Felicity Collins commented:

“…. The circle of stones shows us the face of grief, in particular it shows us the faces of women taking on the public role of mourning with their bodies and their voices. . The film’s quiet focus on the intense expression of collective grief reminds us that remembering the past through mourning is a way of making history and that women play a key role in this process.”

In 2002, with the help of ETAN, Filomena took the film on a tour of the United States and screened it for the U.S. Congress. According to Filomena, she thanked the Congress members for their time, and asked their indulgence to watch the film she brought with her. As the video player began she turned her back and left some of the most powerful people in the world to watch this simple plea for justice. Among the audience who saw the film were Hilary Clinton and Condaleezza Rice. According to Filomena, with tears in her eyes Ms Clinton bent forward to whisper in her ear ” I cannot promise, but we will see what we can do”. We are still waiting Ms Clinton.

Made purely as an act of friendship for the people of Suai this little film has done some good work, now it can continue via this website.


For a more detailed account of the Suai Church massacre of 6 September 1999, see 1999 East Timor Crimes Against Humanity


Image: The Suai Church where the notorious massacre of innocent unarmed civilians and clergy was committed on 6 September 1999 in the wake of the annoucement of the results of the autonomy referendum.
at Friday, November 21, 2008