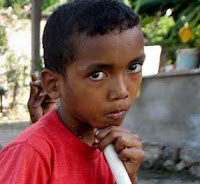 16 October 2008 : By Rob Taylor CANBERRA (Reuters) - East Timor is facing a food crisis and more than half the fledgling country's youngest children are now going hungry as global food prices soar, a new aid report warned on Thursday.
More than 70 percent of households surveyed across East Timor were "food insecure" and unable to find enough to eat each day for almost half the year in what was fast becoming a food crisis, a group of international aid organisations warned.
"They've had what they call the hungry season," Oxfam Australia Executive Director Andrew Hewett said, adding the lean period in the poverty-hit nation generally lasted only months."That's been prolonged and we're now talking about people not having enough to eat, going to bed hungry every night, for about five months of the year," Hewett said.
The survey covered most of East Timor, including the Manatuto, Liquica, Manufahi, Bobonaro, Oecusse, Covalima and Lautem districts.
The number of children under 5 suffering from chronic malnutrition was as high as 59 percent in many areas, while in some districts food insecurity touched 90 percent of households, it found.
"Children are lacking protein, lacking enough food, suffering from chronic malnutrition. It's about one in two children under the age of five," Hewett said.
Asia's youngest country has been unable to achieve stability since a hard-won independence from Indonesia in 2002. As well as ethnic and regional divisions, youth unemployment in the $320-million economy is above 60 percent.
Adding to poverty problems, the East Timor army tore apart along regional lines in 2006, when about 600 soldiers were sacked, triggering violence that killed 37 people and drove 150,000 from their homes.
Hewett said East Timor was facing a hunger crisis reflected in other parts of Asia, the Pacific and Africa as global food prices spiralled beyond the reach of ordinary people, with an extra 100 million people now being pushed into food insecurity.
In East Timor, rice prices had doubled due to climate change and a global shortage, hitting thousands despite a government subsidy to blunt the impact.
"There is a need for greater support for emergency food programs. There is also a need to focus on upping our investment in agriculture," Hewett told Australian radio.
The aid groups, including the Christian Children's Fund, Concern Worldwide and CARE International, said a new push to unblock global trade talks was needed to end U.S., European and Japanese food subsidies, and improve agriculture production.
The global financial crisis was also hitting the world's poor far from the epicentre of panicked markets, as rich countries turned their attention inwards and looked at cutting aid.
"Those hidden victims are people living in developing countries. With any crisis it's the poorest who are hit hardest," he said.
From: http://thestar.com.my/news/story.asp?file=/2008/10/16/worldupdates/2008-10-16T092051Z_01_NOOTR_RTRMDNC_0_-359913-1&sec=Worldupdates
Image: East Timorese boy.
at Sunday, November 30, 2008