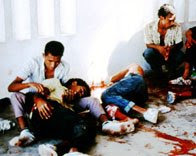 Arsenio waits for father Martino in heaven or hell Timor Post 13 November 2008 - Deputy Fretilin President Arsenio PaixaoBano has firmly maintained his political position against the Catholic Church including some priests who are currently engaging a lot in political practice.


Image: Lest we forget. A scene at the Santa Cruz cemetery in Dili, East Timor on 12 November 1991. A horrifying act of mass murder committed by the Indonesian military for which there is yet to be an accounting.
at Friday, November 14, 2008