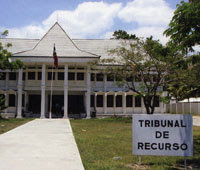 Today's Court of Appeal decision outlawing the Gusmao-led government's transfer of US$390 million from the national petroleum fund to government coffers has created an institutional crisis in Timor-Leste because the government no longer has any money to spend from the budget, FRETILIN said today.

The unanimous Court of Appeal decision of three judges ruled that the government's creation of the economic stabilization fund and the withdrawal of US$390 million from the petroleum fund breached the Constitution and the Petroleum Fund Law.

FRETILIN's leader in the National Parliament, Aniceto Guterres said today: "FRETILIN, its political allies and Timorese civil society warned the Gusmao-led AMP government many times before and during the debate on the supplementary budget that the proposed withdrawal from the petroleum fund was unconstitutional but they ignored our advice.

"The people of Timor-Leste now await a prompt, appropriate and law-abiding response from this government and its parliamentary allies to a constitutional, institutional and financial crisis of their own making.

"The Court of Appeal decision today means that the government budget for the whole for 2008 is US$360 million, or US$390 million less than the US$773.4 million it assumed was previously available.

"The budget execution report issued by the government for the three quarters ending September showed the government claimed at that stage it had already spent more than US$455 million this year, including US$60 million from the US$390 million which the Court declared unconstitutional.

"The government now only has money to provide some community services and pay some civil servants until the budget for 2009 is approved.

"The Court decision also prohibits the government from accessing petroleum fund money to pay for spending on budgeted government contracts awarded without a lawful and transparent tender process.

"This includes the environmentally devastating heavy oil power station which was rejected by a majority of members of parliament, and the naval patrol boats it has ordered.

"The government also cannot spend any more money from the Economic Stabilization Fund as the fund was declared to be unconstitutional."

Guterres said: "Government ministers, public servants and international advisers could face prosecution for devising schemes, including the backdating of receipts and contracts, to breach the Court's decision."