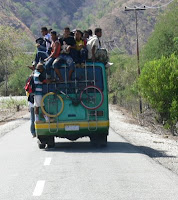 Each of the families was assisted to return with transport provided by the Ministry of Social Solidarity and IOM. UNPol provided security during the movement from the camps. Each person, including children, has also received 16 kg of rice. Those who are eligible to receive a recovery grant from MSS to help them rebuild or repair their homes can receive the money at the BPA.

The Minister of Social Solidarity, Maria Domingas Fernandes Alves, and the Secretary of State for Social Assistance and Natural Disasters, Jacinto Rigoberto Gomes, have thanked the camp managers at each of the camps for their work over the past two years. They also thanked the SLS agencies ­ IOM, CARE and CRS - for providing the camps with humanitarian assistance, and Oxfam, Plan, and UNICEF for their water and sanitation support to the camps over the past two years.

The MSS/UNDP dialogue teams helped organize preparatory meetings at the camps to support the return of IDPs. The MSS/UNDP dialogue teams have been working with Chefe Aldeias, Chefe Sucos and youth representatives in the receiving communities to try to ensure that the situation in areas of return remains peaceful. The Minister of Social Solidarity, and the Secretary of State for Social Assistance and Natural Disasters, have expressed their hope that IDPs are able to return to their former homes and rehabilitate them in peace.

With the return of IDPs from FFDTL Tasi-Tolu, SD Farol, Belun, Fokupers, HAK, Radio Loriku, SAMES, and Igreja Hosana more than 10,300 IDP families will have received a recovery or reintegration package under the Hamutuk Hari’i Futuru National Recovery Strategy. A total of 41 IDP camps are now closed.
at Thursday, November 27, 2008