East Timor Prime Minister: We had to make policies to buy peace 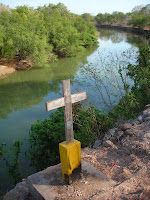 Sydney Morning Herald 21/11/08 - East Timor has gone on a spending spree to try to buy civil peace, but it's stirring its own unrest. Lindsay Murdoch reports from Dili.

Joni Marques can't believe his luck. 'Kill them all,' he yelled to his militia subordinates on 25 September 1999, precipitating the massacre of nuns and priests in one of the more heinous crimes in the aftermath of East Timor's vote for independence from Indonesia.

Sister Erminia knelt and prayed as she was slashed with a machete. She was then thrown into a river and shot twice. Petrol was poured over three of the car's passengers and they were set alight. As one ran, Marques shot him dead. Another was tied to a tree and mutilated.

Indonesian-trained Marques, who claims to have acted on the orders of unnamed Jakarta generals, pleaded guilty at a United Nations tribunal in 2001 and was sentenced to 33 years' jail. But in June, to his surprise, Marques received a presidential pardon and is now the beneficiary of an unprecedented spending binge by the coalition Government in Dili.

When released from jail, Marques went to live with his wife in a Dili refugee camp. That made him eligible for up to $US4500 ($7339) - a payment from the Government to families that agree to leave the camps. Marques couldn't believe his luck again.

Because his wife is a public servant, Marques's family receives free rice each month. She's also about to receive a month's salary as a Christmas bonus. And now Marques and his family live rent free in a house built with foreign aid. There seems no end to his good fortune, particularly measured against his past.

The Herald interrupted Marques's afternoon nap and found that the contrast was not lost on him, either. "I don't want to talk about my life because people might take things away from me," Marques says.

Six years after gaining independence, East Timor's Government has thrown away the rule book for developing nations and is spending some of its oil and gas wealth that had been earmarked for future generations. Since 2005, its budget has increased 450 per cent to $US800 million, mostly in the name of peacemaking.

"We had to make policies to buy peace," said the Prime Minister, Xanana Gusmao, in a recent interview.

Most of the 100,000 refugees forced from their homes amid the 2006 violence have taken the Government's money and gone on spending sprees. Motor bikes and cars jam pot-holed streets, and DVDs and televisions are emptying out of stores.

The Government's largesse is spread throughout the half-island country. People aged 55 or older, most of whom have only ever lived in hand-to-mouth poverty, get a pension of $US20 a month - unheard of in most developing nations.

Image: A cross marks the spot in the remote eastern region of Lautem where one of the most heinous crimes against humanity was committed on 25 September 1999. For a detailed report of this crime, see Murder of Los Palos Clergy 25 September 1999
at Saturday, November 22, 2008