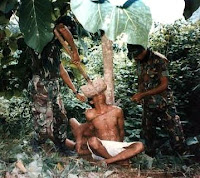 East Timor Legal News Source: Amnesty International 14 August 2012 - Crimes against humanity and other serious abuses have yet to be addressed in Timor-Leste.


"Despite its involvement in Timor-Leste since June 1999, the UN has failed to meet its commitments to ensure justice for victims"

UN Secretary-General Ban Ki-moon must ensure that justice for the victims of human rights violations committed during the Indonesian occupation of Timor-Leste is firmly on the agenda during his two-day visit to Timor-Leste this week, Amnesty International said.

Indonesian security forces and their auxiliaries were responsible for unlawful killings, enforced disappearances, rape and other crimes of sexual violence, torture and other ill-treatment as well as many other human rights violations during the occupation of then-East Timor from 1975 to 1999 and in the context of the 1999 independence referendum.

A persistent culture of impunity means that the overwhelming majority of these crimes against humanity and other human rights violations have yet to be addressed.

"Despite its involvement in Timor-Leste since June 1999, the UN has failed to meet its commitments to ensure justice for victims,” said Donna Guest, Amnesty International’s Asia-Pacific Deputy Director.

“A series of flawed national and UN-sponsored initiatives have yet to result in a single person being prosecuted for human rights violations committed in Timor-Leste during the Indonesian occupation. Attempts to bring to justice those responsible for human rights violations committed in the context of the 1999 referendum have also been grossly inadequate.”

"As the most senior UN official, Secretary-General Ban should commit to resolving the UN's failures. During his visit, he should meet with the victims waiting for justice and reparation in order to hear their views and concerns."

"He should also urge the Timorese Parliament to take immediate steps to provide full and effective reparation to victims. In particular he should call on Parliament to debate, amend and enact two draft laws, sitting before them since 2010, which seek to establish a national reparations programme and a 'Public Memory Institute'."

During his visit, the UN Secretary General will hold talks with key Timorese government officials, including the newly elected President and Prime Minister, regarding the future of the UN’s engagement in the country after the planned withdrawal of the United Nations Integrated Mission in Timor-Leste (UNMIT) at the end of the year.

The UN's refusal to implement the 2005 Commission of Experts’ recommendations to establish an international tribunal has proved particularly damaging to justice efforts.

Moreover, the Special Panels established in the Dili District Court were under-resourced and seriously flawed. More than 500 investigative files remained open when the Panels closed in 2005.

A Serious Crimes Investigation Team (SCIT) has continued to investigate past crimes, and to pass case files to the Prosecutor-General, but this has so far resulted in little action. The SCIT is threatened with closure at the end of 2012 before it can fully complete its investigations.

"As an immediate step, the Secretary-General should commit to ensuring that the SCIT has sufficient time and resources to complete its investigations. The UN must also develop effective mechanisms to provide on-going monitoring and ensure that national authorities act upon case files handed to them by SCIT," said Donna Guest.

More than 300 individuals accused or convicted of crimes against humanity and grave human rights violations during the occupation and in the context of the 1999 independence referendum have fled to Indonesia and continue to evade justice.

In July 2011 the Dili District Court found former militia member Valentim Lavio guilty of murder as a crime against humanity; however he escaped to Indonesia in October 2011.

Lavio's case raises serious questions about the ability or willingness of the Timorese and Indonesian authorities to hold to account those responsible for past crimes.