But the UN is no longer in charge and he is, and is therefore responsible for the actions of his command, the PNTL.

Tempo Semanal can report that the PNTL, 10 days ago, under the command of His Excellency General Commander Longuinos Monteiro, has lost an FNC semi -automatic rifle. The matter was being kept secret until Tempo Semanal obtained the information just within the last 24hrs.  PNTL High Command and His Excellency General Commander Longuinos Monteiro wanted to keep the matter secret given the swearing in of new government.

It is reported from insider sources that a senior and high ranking officer in the PNTL with the initial OA had an FNC semi -automatic rifle taken from his car on the evening of 30 July 2012.  It is understood that OA is the member of a martial arts group and there may be some mysterious intra martial arts group conflict connection to the theft of this weapon.
FRETILIN MP David Ximenes (above) had strong words for the issue of PNTL and weapons control some time ago.

Tempo Semanal was told there has been no report to the government related ministry since the gun missing. According to the witnesses the car was parked some where in Pantai Kelapa Dili. Tempo Semanal was told that the serial number of the weapon is 117251. There was an order to have an investigation into case by tomorrow, missing with the FNC weapon were two magazines means 60 bullets in the two magazines. 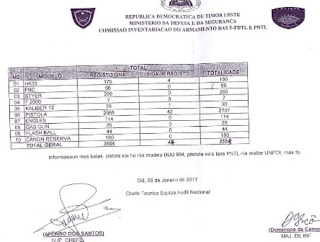 Missing weapons as of January 2011 - PNTL

This is not the only PNTL weapon missing. PNTL Longuinos Monteiro has ben trying to hide the incompetence of his command when is comes to weapons control for some time.  This paper reported on weapons losses in 2011 when it showed dozens of weapons were missing.

Thomas De Deus Soares a University student raised his concern over the missing weapon and urged the minister for Defence and security to take a strong and immendiate action to pursue the weapon and punish the police officer.

“I think when the authorities lost their weapon may create panic to the community and I urged Prime Minister Xanana to take necessary action to recover the weapon and in the mean time the police officer must responsible for the failure,” said soares.

“I fell sorry to heard this information and I think there is big problem with the weapon management in PNTL. Because we heard that there are PNTL weapons still at large since 2006,” he added.